December 27, 2006
Everyone from TV Guide to Entertainment Weekly is putting out their Top 10 lists of the year, so here’s mine. 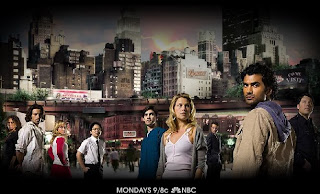 1. Heroes (Mondays, NBC). My goodness. This is one of the best (if not the best) shows I’ve ever watched. Seriously. Besides the great writing, filming, pacing, plots, and characters, the series tells a great story—and great stories usually beget good God-talk (which, as this blog has said before, isn’t uncommon for comic-book films and television shows). For this blog’s take on God-talk in Heroes, see here, here and here. 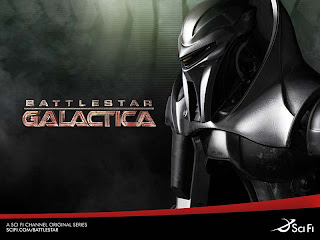 2. Battlestar Galactica (Sundays, Sci-Fi). It’s been awhile since I’ve written about this twenty-first version of last century’s rag-tag fugitive-fleet saga, but that doesn’t mean they haven’t had some good episodes—including "Collaborators" and the Adama-centric "Hero", which explored the truth of how confession brings freedom. The season began on very dark terms, bringing heart-wrenching performances from Michael Hogan (Saul, who agonizingly executed his good-intentioned wife for collaborating with the Cylons) and Katee Sackhoff (Starbuck, who dealt with coming to love and then lose a little girl the Cylons deceived her into believing was her daughter). The show is pushing some boundaries in its explorations of war, why we fight each other and what makes us human. While some of that boundary-pushing is effective and relevant to the storylines (especially those related to the effects of war), for the first time I purposely skipped an episode ("Measure of Salvation") due to warnings of torture scenes and sexual content. The last several episodes of the fall season, however, were excellent, leaving us with a clue to Earth’s location in human hands, the Cylons on their way to grab it for themselves, and Adama ready to nuke a planet in a system about to go supernova in order to keep it away from them. Catch up on the arch-heavy series at Wikipedia. 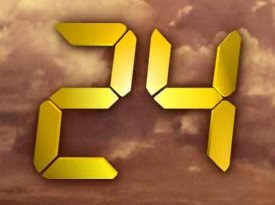 3. 24 (Mondays, FOX). This one will probably jump to the top of the list next month (when its season begins on January 14), but I haven’t seen it since last spring, so memory dims its effect—which is to dramatically increase my heart rate and take my usually very low blood pressure with it. This show is not only well written with gripping storylines, heart-attack action and characters you love (and love-to-hate), but it also raises ethical questions and asks more than once if the ends justify the means. And that brings a plethora of God-talk with it, an effect that isn’t lost on those in the Christian arena: Hollywood Jesus’ Maurice Broaddus says “the essential story, the monomyth, echoes the story of Christ.” Christianity Today offers a Bible study series based on the show. And then there’s Mark Driscoll’s recent comparison of main character Jack Bauer to Jesus, which stirred the hornet’s nest in Christian blogdom, as JollyBlogger observes. 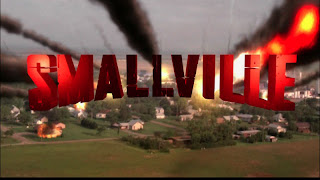 4. Smallville (Thursdays, CW). In its sixth season, this year’s Smallville storylines include more of we-know-they-will-be-superheroes (including Green Arrow and Martian Manhunter) while giving the maturing Clark Kent a chance to fill out into the Superman he’s yet to be—and Lex Luthor a chance to grow into the villain shoes he’s already filling quite well. We are seeing the effects of choices made by Clark and Lex in earlier seasons, and more of where the paths they’ve chosen will lead them. Heads up: this January will see the formation of the infamous Justice League, which gives geeks like me butterflies, heh. You can catch up on the previous seasons at the CW’s site, Wikipedia or KryptonSite (which is also a killer site for spoilers, if you like that kind of thing). Read what this blog’s written about the series here, here and here. 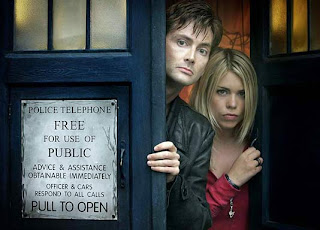 5. Doctor Who (Fridays, Sci-Fi). We’ve just completed the second season of this British campy-but-social-commentary time-traveling sci-fi series in the U.S. (they’ve just comleted season three across the pond). As the season concluded last week, we watched the 10th Doctor bid a tearful good-bye to his companion of two seasons, the wonderful Rose Tyler. Here in the States, the third season won’t start until next summer—and I’ll miss it. More than once, this series has provided God-talk fodder for this blog (see here and particularly here). If you’re new to this sci-fi classic (which began back in the 1970s)—or you just want to catch up—check out the BBC site, Wikipedia or Shannon Sullivan’s site.

6. Jericho (Wednesdays, CBS). This end-of-the-world-as-we-know-it series isn’t the most gripping one out there, but it has its hooks for those of us in the Red Dawn generation—like who is that shadowy Hawkins, really? And what has Jake been doing these last five years that makes him so good with a gun and explosives? And who set off all those nuclear explosions? Why are the Chinese dropping supplies in the American heartland? And, perhaps most intriguing, why doesn’t one of the large main cast go to church or believe in God when they live in the heart of Bible country? Not that the show doesn’t generate God-talk—the Prodigal Son angle is a reoccurring theme—but, come on, it wouldn’t hurt to explore faith in the face of an apocalypse in America’s heartland. 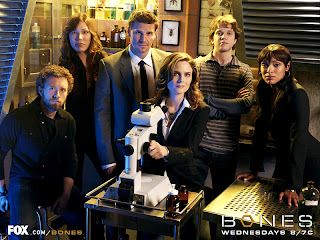 7. Bones (Wednesdays, Fox). In its second season, this crime drama stars Buffy-verse’s former-Angel David Boreanaz as a former Special Forces turned FBI agent Seeley Booth who often pulls Jeffersonian forensic anthropologist (and novelist) Dr. Temperance Brennan (Emily Deschanel) into his homicide cases. It mixes dry and wry humor in with serious crime investigation—which, to the relief of this blogger, usually skips the gore and graphic crime reenactments associated with the CSI genre. What’s the God-talk angle? Brennan is cut-and-dried what-you-see-is-what-you-get. Her worldview is that everything works according to anthropological drives and needs, leaving no room for God or faith. That view, however, is periodically challenged by Booth’s belief in God, and every so often his faith works it way into their lives and conversations. An interesting twist on this formula played out in the last episode of the fall season, which had Brennan struggling with how to deal with her on-the-lam father’s murdering actions in protecting his family. When Booth tells her that in her father's world, his actions would be deemed honorable, she declares: “There’s only one world. It’s this one.” Her implication—that there’s a moral law that applies to every person—is an unusual one in today’s popular culture, and that brings God-talk into open spaces. Catch up on this series at Fox or Wikipedia. 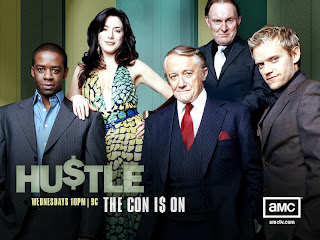 8. Hustle (Wednesdays, AMC). This delightful BBC import just concluded its third six-episode series here in the States and begins its fourth in the UK in 2007 (not sure when it airs here). The witty series, which follows the exploits of a group of con artists, has an old-time feel, like the 1960 Ocean’s Eleven, and it's peppered with periodic winks-and-nods and character asides directed to the viewer. What does God-talk have in with common con men (and women)? Paraphrasing the characters’ advice to we viewers: you can’t con an honest man but someone who wants something for nothing is an easy mark. The crew only goes after this sort, so most shows are entertaining and somewhat insightful looks into how one’s sin leads to an eventual downfall—resulting in a somewhat clever take on Romans 1. Most of the episodes are self-contained, so you can jump in anytime. For more about the series on Wikipedia. 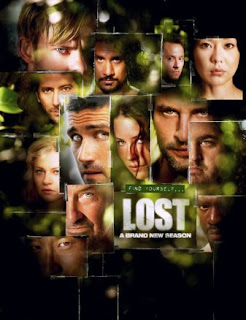 9. Lost (Wednesdays, ABC). Though I think it's not as good as it used to be, this adventure-mystery-sci-fi series is still on my TiVo season’s pass. It’s provided fodder for this blog more than once, most recently with the death of this blog’s favorite character, Mr. Eko. To catch up on the series see Wikipedia or the ABC site. 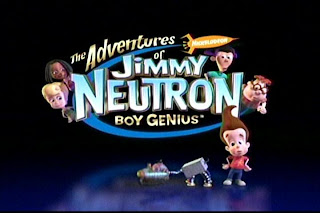 10. Jimmy Neutron (Various, Nickolodean). You can’t have kids and not have a favorite children’s series. This CGI series (created by John Davis who recently directed Ant Bully) follows the exploits of Jimmy and his friends (Sheen, Carl, Libby and Cindy) as his super-genius mind gets them in and out of sticky situations. The series often makes plays on pop-culture, my favorite being "Monster Hunt" which is a re-do of Jaws (one of my favorite films). Episodes often reinforce good values and promote the importance of family, friendship, community and doing what’s right—all good opportunities for God-talk with my kids. The film that started it all was nominated for an Oscar for Best Animated Feature. For reviews of that film, see the collection at Christianity Today.

(Word of warning: Some of these shows contain violent and sexual content that will offend some viewers. Use prayerful caution when determining what you put on your TV screen.)