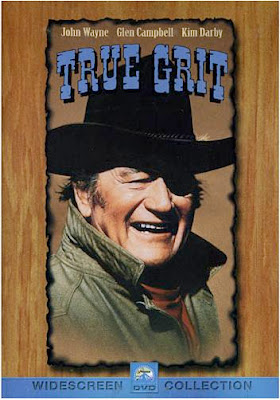 In the last days of 2007, my husband and I sat down with our kids and watched True Grit, a 1969 film for which John Wayne won an Oscar for his portrayal of the aging one-eyed whisky-drinking Marshall Rooster Cogburn (who appears again in 1975 in Rooster Cogburn, in which Wayne co-stars with Katherine Hepburn).

I’ve been a John Wayne fan since I was kid, and this is one of my favorite Wayne films. True Grit follows fourteen-year-old Mattie Ross (Kim Darby) who hires the morally questionable but effective Cogburn to go after the man who shot and killed her father (who’s hanging out with a group of outlaws led by a man portrayed by none other than Robert Duvall). Cogburn is a man who revels just a bit too much in getting the job done the quickest and most effective way he can—which leaves a trail of 23 dead men in four years in his wake. Like The Searchers, it’s not a typical role for Wayne, but somehow those seem to be his better films. Mattie is someone Cogburn has a hard time figuring out how to handle. My husband pointed out during the film that Cogburn’s used to manhandling, railroading over or intimidating everyone he comes into contact with, but since Mattie is a young (though extremely headstrong) girl, he’s somewhat at a loss on how to deal with her. But Mattie’s authenticity, courage, tenaciousness and “grit” quickly works her into his heart, at one point causing Cogburn to exclaim to Texas Marshall La Boeuf (Glen Campbell), “By God! That girl reminds me o' me!” Indeed, they do share some similarities, and it makes one wonder if Cogburn started life with the moral tenacity and compassion of Mattie—and just how he lost his way. Anyway, it’s not long before Cogburn’s sharing thoughts and memories with her he probably hasn’t told another soul in decades. And the scene where he rides a horse literally to death and “borrows” a wagon to get Mattie to a doctor endears the old codger into your heart (if he hasn’t worked his way there already). Ultimately, this time through I really grew to appreciate and was challenged by the power and effect of Mattie’s authentic and honest heart on the people around her. Good stuff.
Both my kids (nine- and four-years-old) really liked the film. My son liked the horses and the mountains, and my daughter was thrilled to see a young girl be so brave. And, while she’s not so fond of Cogburn ("He drinks too much alcohol," she astutely observed while making a disgusted face), I think she’s a bit taken with Wayne (she’s done some acting herself, so she can separate roles from the actor). Heh. I’m passing down a torch.
(Images: copyrighted by Paramount)