A bit on religion in 'Riddick' 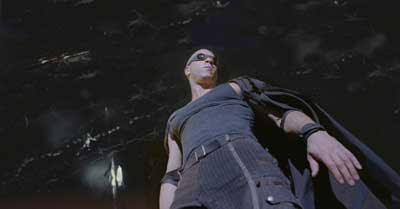 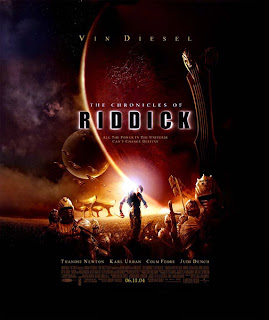 Recently, I caught the tele-version of Chronicles of Riddick, the Vin Diesel sci-fi sequel which follows the Pitch Black angsty anit-hero who’s now thrust into a messianic prophecy in which he’s to fight the Necromongers, an evil empire who kill all who don’t convert to their religion. Critics pretty much panned the 2004 film (it got a dismal 28% rotten rating at Rotten Tomatoes), but in spite of that (and its violence) I found it worth considering as it's loaded with a ton of God-talk. Heh, and I’m not the only one who thinks so: Kevin Miller at Hollywood Jesus impressively squeezes much more out of the film than I ever could have, and Todd Hertz’s review at Christianity Today (while mostly negative) pulls some aspects out of it as well.

This time through the film, I was particularly struck by its take on religion. The Necromongers go from planet to planet, proclaiming a one-true religion and demanding that all inhabitants either convert or be slaughtered. “Converts” are lined up in halls and physically/mentally altered to be slaves to and warriors for the Necromancers. One character refers to the process as a time to “replenish the ranks.” There is no room for questioning or doubt: obedience is without question. Conformity is rampant, coercion is a way of life, and fear is the driving method of both conversion and living out beliefs.

While our own personal experiences with religion don’t often resemble the extreme version portrayed in Riddick, committing to or living under a religion instead of Jesus nonetheless will end up with a twisting of the Truth—using a lot of the same language and images but with a different focus. And efforts to live under and maintain that will start exhibiting the same characteristics (albeit, usually in much more subtle or less extreme forms) as those in Riddick. Now, putting together a system of beliefs about or practices in worshiping God isn’t a bad thing; but when those beliefs and practices become “sacred” or the object of our focus rather than a trusting relationship with the living God himself, we slip into religion.

What Jesus ushered in was not religion but a relationship. Jesus brought restoration of a relationship with Father—the loving, abundantly good, holy and just and always-giving God who created us and longs to bring us home in him. In that trust-relationship with God, we have a new way of living—and that Kingdom-living has nothing to do with religion. Consider this from Wayne Jacobsen:

"Now this is eternal life: that they may know you, the only true God, and Jesus Christ, whom you have sent."

These are the words Jesus prayed in the Garden, shortly before his crucifixion. He didn't die to give birth to another religion, but engage people in a relationship with him and his Father.

It has always bothered me that institutional Christianity doesn't look any different to the world than any of the other religions. We who allegedly walk with the living God have the same traditions, obligations, shrines, sacrifices and ceremonies that they have. Oh, we call them by different names and tell them we are different. But it certainly doesn't look that way to outsiders.

He wants to be at our side when we waken in the morning and walk with us through every step of our day. He wants to be the shoulder we cry on when we hurt, the resource we count on every moment, and the ever-present guide that teaches us how to walk away from the bondage of self and embrace life as Father knows it to be. Then we can be like him in the world, loving others as we have been loved.

Again, I wish I had more time to go into this, but if you want to read more on religion versus relationship, take a look here. Off-the-Map, Dallas Willard’s site, Renovare and Jesus Creed are also good places to peruse.

(Note: This film, even in its toned-down tele-version, contains scenes of violent action and some language. Use viewer discretion and check out reviews of critics you trust before viewing this film.)