Looking back at 'The Mummy Returns' 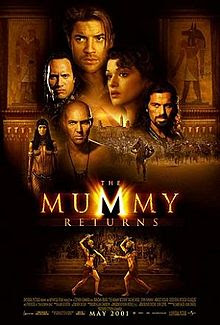 Ken Morefield at 1More Film Blog just posted my guest review of The Mummy Returns (2001), one in a series he's put together looking back at films from 2001.  This was a fun review, heh:


Ten years ago, Ken called The Mummy Returns the worst movie of 2001. A decade later, he went looking for someone to stand up for the Stephen Sommers franchise. Carmen Andres answers the bell:

The Mummy (1999) is one of my favorite films of all time. I am, as Roger Ebert puts it in his review, “cheered by nearly every minute of it:”


I cannot argue for the script, the direction, the acting or even the mummy, but I can say that I was not bored and sometimes I was unreasonably pleased. There is a little immaturity stuck away in the crannies of even the most judicious of us, and we should treasure it.

Indeed, I treasured The Mummy so much I bought the original film poster, which now hangs on a wall sandwiched between The Fellowship of the Ring and The Assassination of Jesse James by the Coward Robert Ford.

So, you can understand why I was one of the first in line two years later to see The Mummy Returns (2001). ...

You can read the rest at Ken Morefield's blog.