Thinking about bubbles and molecules—and the church 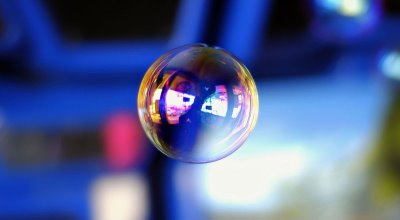 So, we’re on the way to the airport to drop off my husband for a flight to D.C. Our two kids—seven-year-old Lizzie and three-year-old Brian—are in the backseat. Lizzie spies on the dash cover in front of her dad two empty miniature bottles of bubbles, which were full when she and her dad picked them up at a wedding reception they went to a couple of weeks ago (which tells you how often I clean out the car, ack). The tiny bottles had popped open and their contents evaporated sometime over the last couple of days.

“Why did they do that?” Lizzie asks.

“Well, how did that make them open?”

“Er, the molecules inside the bottle, um, expanded or something,” I stammer, looking over at my husband with a meaningful expression. “Honey, why don’t you explain?”

For most of the 17 years we’ve been married, my husband has been my very own personal walking encyclopedia. Often, I refer the kids to him when they ask something at which I "hem" and "hah." Most of the time he happily obliges, though sometimes (like when I ask him to explain something obscure like the mating habits of the empire penguin) he gets perplexed. Today, he plays along.

He explains how when the molecules in the bubbles started to get hot, they moved faster and faster, bouncing and pushing against each other until they expanded the space in between them, thus increasing the volume in a container which couldn’t hold them anymore and pushed the lid right off. (At least how I understood what he said, heh.)

“Oh, I get it,” my daughter says (she’s a smart one) and they move on to another question.

But I’m stuck back on the image of the molecules busily moving faster and faster with so much energy that they have no choice but to bust open a tightly closed lid. And, for some reason, I’m also thinking of the church.

I start to wonder: Does the church work in this organic or natural way, too? Did it work that way in Acts? Were early church folks full of so much love and energy that the church just had to expand and blow the lid off their houses and communities? Did God heat them from the inside out to the point that they could not longer contain it, moving with such force that the love and grace could only expand outward? Is this how we are supposed to be—heated and moving and every expanding and even exploding—molecules of love?

I glance over at my husband, who’s looking at me a bit cross-eyed. Oops. That speaking-out-loud-as-I-think thing was happening again.

Now, as I sit here thinking once more of those bubbles and molecules, I realize I really like that idea of the church being like heated molecules. It both relieves and excites me because it reminds me that it isn’t me that has to put the energy into expanding the community of God’s children—God does that. He heats me, fills me, moves me from within, using me in the most natural way to expand his Kingdom. I just have to receive his love and grace, and he does the rest.

And it reminds me that the church is not just me but a very full and expanding “we.” Somehow, just like those molecules in the bubbles, God designed the “we” to be a force with which to reckon. One molecule couldn’t bust the lid off anything, but lots of them do more than we’d think possible. When God’s children live together as we are meant to, the potential for impacting the world for the Kingdom is limitless—and that is exhilarating.

And that comes back to something I’ve been thinking about for quite awhile: what does this “living together as we are meant to” actually look like? Because that will determine how we do church (and that is what, again, attracts me to the emerging movement conversation.)

But, for now, I’m really enjoying just thinking about bubbles and molecules.