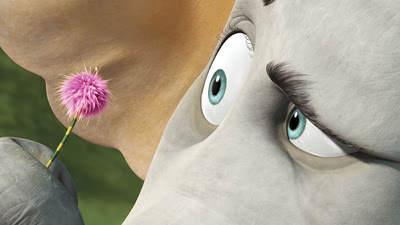 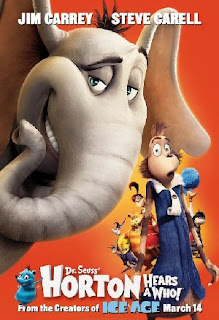 After reading Peter Chattaway’s bloggy review, today I decided to take my Spring-break kids and a neighborhood girl to see Dr. Seuss’ Horton Hears a Who. This is the first time I’ve been to the movie theater since Ratatouille last summer and (once I got past the sticker shock—ouch) it was a good time.

The kids (my four year-old son, nine year-old daughter and just-turned 11 year-old neighbor) simply loved it. Heh, my son kept grabbing my hand to cover his eyes during the “scary” parts, but couldn’t keep himself from parting my fingers and peeking through. My daughter, the burgeoning film critic and critical thinker (Mama is proud), noted there were a couple of parts that were good but could have been done better (I think she’s right, but then I’m biased). And all three giggled in the backseat on the way home as they reminisced on the pony-populated imaginary speck-world of one of Horton’s little jungle friends—particularly the part about the butterflies (you have to see the film to appreciate that one). 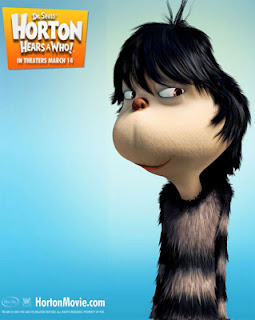 I enjoyed the film, too. It has all the things Chattaway says, but the aspect that most resonated with me has to do with the power and impact of a community that embraces and celebrates each of its members. My favorite part came near the end and centers around that. (Warning: major spoilers ahead if you don’t know the original story and significant spoilers if you haven’t seen the movie.) In a moment that literally made me catch my breath, the Mayor walks into Whoville’s old and abandoned observatory and stares in wonder at his seemingly-brooding son’s beautiful, creative and incredible inventions that—like the communities of the film ultimately do themselves—work together in a crazy harmony that inspires awe. This symphony of inventions goes a long way in saving the lives of the Whos, but it is ultimately the boy’s voice itself added to the rest of Whoville that allows their voices to be heard.

I couldn’t help but think that this is the way it’s supposed to work. I found these scenes to be powerful images echoing the way God meant us to be. We each have gifts and they’re meant to be used in and for the ever-growing life of the body, this living-together we do in and from Jesus. Each of our voices is important and part of the expression of our whole-life family. When our gifts and voices are expressed together, then that crazy beauty, love, and glory weave and grow within and between us and spill out onto the world with a Life that flows from God in ways beyond our imagination. But when these gifts, voices and their bearers are excluded—be it because they are misunderstood, seen as a threat, or hidden by the bearer out of fear or expectation—the community ultimately suffers or stunts in its growth. (The film also explores the power of discerning, confronting and countering voices that harm and mislead the community—and yet also reconciling the bearers back into the strengthened community—which also plays an important role in Kingdom life.) This Kingdom-living and walking together can be a crazy symphony, but it is awe inspiring and life-bringing.

So, if the recommendations of this blogger and three kids carry any weight, we say Horton indeed comes through.