Some thots on the 'The Last Mimzy' 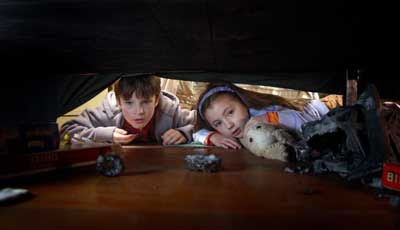 The other night, my husband and I watched The Last Mimzy with our children. I must admit I was a bit hesitant to watch it because it got a fairly bad review from a critic I particularly respect. And he wasn't alone.

While I agree that the film leaves a lot to be desired (and coddles a fairly strong New Age-ish thread), I gotta admit that we actually enjoyed it. That won't come as a surprise to some of my friends (one in particular who once shared that she and her husband actually laughed their way through a film of a rather dramatic nature that I recommended to them--oiy). I tend to find enjoyment and redeeming factors in films that others (whom I'll readily admit are more discerning than I) find, shall we say, less enjoying and redeeming. 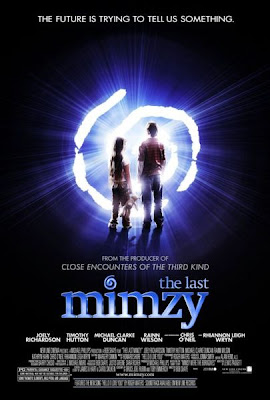 Anyway, I found this film a mixture of echoes from other films like Escape to Witch Mountain and (admitedly, the much greater) E.T. In The Last Mimzy, two sibings--Noah and Emma--stumble upon some unusual objects which start to affect them (especially in enhancing their mental capacities) as they spend time with and use them. I'm not going to give away the plot in case you do decide to see the film, but I really liked that as they struggle with the ultimate purpose of the objects, the children are pulled closer to each other and, in many ways, their parents are pulled closer to them as well. The film ultimately portrays a postive family unit, with parents that start out somewhat isolated (a father submerged in his work and a mother who is contantly wearing earphones) who become lovingly and sacrificially focused on their children when trouble begins to develop.

Aside from the above, another part of the film that I particularly resonated with comes in the interaction between one of the children's teachers (Larry) and his fiance (Naomi). Larry's been experiencing some strange dreams that seem to coincide with Noah and Emma's experiences. When Larry expresses his doubt over making choices based on the dreams, Naomi looks at him in disbelief, asking him how many dreams he has to have before he gets the fact that "universe is talking to you."

While Larry and Naomi's situation and beliefs are steeped in another philosophy/religion (Buddism), I couldn't help but think of how that concept applies in my own life. God constantly reveals himself and his presence in my life, but like Larry, I stand there indecisive wondering if I should play it safe instead of basing my decisions on those observations and experiences. As a viewer watching Larry and Naomi, we get how Larry's dreams fit into the bigger story, but Larry and Naomi don't have the benefit of that perspective. I'm like them. I don't see the bigger Story, but it's there. It's playing out around me and God's constantly working in and about me, inviting me walk with him in his Kingdom, where Love, Grace and Life are expanding and spreading into a world he's every-working to bring back to himself and the way it was created to be.

The Last Mimzy is not Oscar material and doesn't hold a candle to films like E.T., but our family enjoyed it. We didn't find the film too scary for children and, for us at least, the religious elements in the film became an opportunity to discuss with our kids what other people believe. There was one brief situation of sexual inuendo that I was uncomfortable with and some of the language could be offensive to some viewers. As always, use descretion in deciding which films to watch with your children.