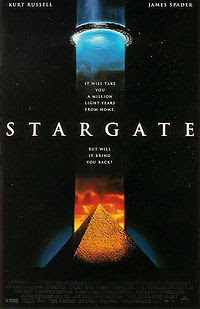 Over Christmas break, my 10-year-old daughter discovered and fell in love with Stargate, the 1994 science-fiction film about the discovery of an ancient piece of alien technology in Egypt that enables people and things to traverse stellar distances in seconds. She must have watched it at least three times. I must admit, it is one of my all time favorite films, too. For all its faults (and it does have them), I find something magical about and a sense of wonder in this film—particularly the chance to walk on another world. The moment we see three moons in the sky is a great one for me.

As I watched it with my daughter, not only did I rediscover that sense of wonder but I also realized another reason I resonate with this film: its two main characters depict two ways we human beings approach the world.

Colonel Jack O’Neil (Kurt Russell) is a shadow of the man he was, racked with loss and guilt because his young son accidentally killed himself with his military sidearm. When we first see O’Neil, he is sitting in his son’s room holding a gun in his lap, surrounded by his son's photos and things. For him, the world is empty and the future holds no hope.

Dr. Daniel Jackson (James Spader), who grew up an orphan in foster care, is an archeologist and linguist whose career is, frankly, in the toilet. He’s been challenging prevailing theories about the age and origin of the Pyramids of Giza for which his colleagues laughingly dismiss him and which has left him without a job or research funding—a death knell for those in the academic profession. The future doesn’t look good for Jackson either.

But while both men have suffered great losses (as a parent, O’Neil’s loss feels admittedly greater, but growing up without parents and the failure to succeed in and the loss of a career are very difficult struggles as well), they face the world differently—and that is no more apparent than how the two approach their first trip through the Stargate.

The U.S. military now has possession of the Stargate and is trying to figure out how to use it. Jackson is brought in because the scientists working on the artifact have reached a dead end, and his unorthodox approach to his field leads to a breakthrough. In the meantime, O’Neil is reactivated to lead a recon mission through the gate in case they get it working—which they do. After sending through a probe robot, they discover that the world on the other side of the Stargate supports human life and decide to send a mission through (with a hidden agenda known only to O’Neil, of course).

As they approach the gate, each man has a dramatically different reaction. For O’Neil the world through that gate is threatening, dangerous, hostile and menacing. Interestingly, we see O’Neil filmed through the grate underneath the walkway up to the gate, which I find an apt image as he is figuratively and personally imprisoned in a world just like that. O’Neil’s face literally transforms with a snarl and he clutches his weapon closer as he steps through the gate.

Jackson, on the other hand, is filled with wonder. He’s not unaware of the danger (at one point, he looks thoughtfully and knowingly on a gun a soldier is carrying), but for him the world through the gate is filled with promise, wonder and marvel. He stands at the gate longer than the rest, relishing the moment, touching the barrier. His face reflects his joy and wonder. Then, in a scene that reminds me of a baptism (a kind of taking on of life), he closes his eyes and leans into the gate.

I love this moment. It reflects for me the kind of life-like optimism, joyful pragmatism, or hopeful realism that I’ve found myself living in these days. It is taking time to relish the wonder and amazing nature of life here and now even as you wait for the proverbial shoe to drop. It grows from the experience that "life will out," that God is good, that ultimately because of him everything will be okay—even in the midst of circumstances that would scream otherwise.

Jackson’s tenaciousness for life is evident later in the film, when a woman for whom he's come to care deeply is suddenly mortally wounded. In the pain of losing his son, O'Neil has almost completely cut himself off from others so he won't feel that kind of pain again. Jackson, on the other hand, engages with others in spite of the darkness that's assaulted his life. He risks everything for her, not only putting his life on the line but also his heart.*

Our care for and love of others can bring great loss but also great hope and joy. Jackson chooses to live on the hope and joy side—and O’Neil is invited there by his interaction with Jackson and the relationships he forms with others on that world. At the end of the film, when Jackson asks him if he will be okay, O’Neil smiles and tells him yes—and he knows it. For O’Neil, the darkness may still hang at the edges, but the light has broken through. His world has hope in it again.

That, too, reflects for me the truth of what happens when we live out of and walk with God. We gain a certain hope and joy in life, and that changes how we view and interact with others and the world around us. It enables us to risk more, both in our lives and hearts. And that affects those with whom we cross paths and form relationships. The darkness may hang around the edges (and even seem to overwhelm the light), but the light will and does prevail.

As we watched the film again and got to the scene where they approach the Stargate, I asked my daughter if she would go through. She laughed and said, “No way!” Then she asked me if I would.


*This paragraph modified after posting for clarification