"Heaven and hell are right here, behind every wall, every window, the world behind the world. And we're smack in the middle." –John Constantine 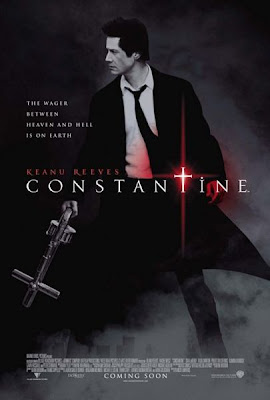 Man, I really wanted to like Constantine. In my book, a film that takes for granted heaven, angels and demons are real has incredible potential to make for great God-talk. But this film ultimately fails. That doesn’t mean I didn’t learn something, but it’s from what’s missing in the film rather than what’s in it.

Since birth, John Constantine (Keanu Reeves) has been able to see the angels and demons who walk the earth unseen by most people. His “gift” drove him to attempt suicide earlier in his life, and though he died for two minutes (a two minutes he declares were an eternity in hell—where those who commit suicide are automatically sent), he was resuscitated and realized what he saw was real. He knows his soul is doomed to hell when he finally does die (even though his suicide ultimately didn’t succeed), but he hopes to gain the attention and forgiveness of God by sending as many demons back to hell as he can before then. A chain smoker, Constantine’s dying of lung cancer when he encounters Angela Dodson (Rachel Weisz), whose looking into the death of her sister—who also, Constantine discovers, had the “gift” and committed suicide. Together, they embark on a struggle against evil (ultimately, the Devil himself) to get her back—and prevent a hell-spawned apocalypse along the way.

The film does have its good points. It vividly depicts a deeper reality to the world, one where spiritual beings exist as real as each of us. In addition, it effectively portrays the sense of hopelessness that develops when one approaches heaven as a place you must earn way towards. In the end, Constantine discovers, the way to heaven involves something else, a simple act of self-denial that has echoes of biblical truth—but only just an echo. 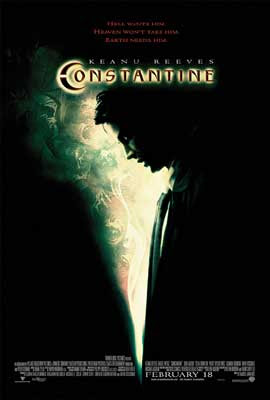 That’s actually how I feel about the entire film—it has faint echoes of truth and hope but they’re ultimately drowned out by the rest of the film, which is overwhelming dark. Now, I’m not against films that portray darkness. I get how real darkness is in this world. But this film drowns in it. Any representatives of good are ultimately fallen: an alcoholic clergyman dies in demonic delusions and the only angel that gets any real screen time doesn’t even realize she’s evil until it’s too late. God is completely absent from the film (and the world, according to Constantine) while Satan is more than present. It is a dark, dark world where Satan has much more power than God.

Sometimes, I feel that way—like I’m standing in the path of a relentless tide of darkness that seems destined to win. In fact, I spent some time this past weekend struggling with that perception. (And perhaps that’s why this film gets more rumination than I would normally give it.) It was nothing dramatic or overwhelming, more a grappling with the suffering and difficulties facing some of those I love and the powerlessness I felt encountering that. It consumed my thoughts and emotions. As I went about washing dishes, sweeping the floors and doing the laundry, I wrestled with God and struggled to find my footing.

Ultimately, I found my way towards peace in something I least expected: a hug from my four-year-old son. As I walked up the stairs from the laundry room, he wrapped his arms around me and laid his head on my shoulder. At once, I relaxed under his love for me and mine for him—which amazingly flowed into an awareness of a deeper love: God’s love for me. I felt that calm assurance of God’s love settle inside me, a love that holds us no matter.

And that love called me to more, reminding me that this God who is Love is ever working to restore and renew this broken world (and its broken people), to bring it all back to himself and his Life and Love. And that Life and Love is oh so much more relentless than the darkness—we need only consider Jesus to remember that. In him, Love and Life exploded outward with such power that darkness was doomed. Darkness may surge in its throes of death but it will not and cannot survive. And it is in that Life and Love we can trust and rest.

All that from the tiny arms of a four-year-old.

Even simple acts of love like my son’s are scarce in Constantine’s world, a world where no veil exists between us and angels and demons. Ironically, that makes a lot of sense because God is absent from Constantine’s world, too. And in a film drenched in Christian terminology and symbolism, it is the absence of God that ultimately undoes it—at least for me.

(For a less rambling review of this film, see Christianity Today or the collection at Rotten Tomatoes.)