Marriage and love in 'Date Night' and 'Couples Retreat' 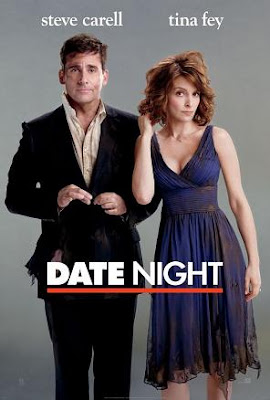 Every couple of weeks, my husband and I try to go out on a date. We hire a sitter for the kids and go shopping, take in a movie or go out to eat (sometimes all three). Last weekend, we doubled with another couple and saw (appropriately titled for the evening, at least) Date Night, a comedy starring Steve Carell and Tina Fey as a married couple whose own date night turns into a comedic nightmare of epic proportions. The film deserves its PG-13 rating and critics rightly peg the plot as contrived and over-the-top, but they’re also right that Carell and Fey are fabulous together (and I hope there are more films in which we can see the two of them together). As the film wrapped up, though, it dawned on me that it bore some interesting similarities to another film we’d rented a few weeks before, Couples Retreat, which stars Vince Vaughn and Malin Ackerman as a married couple who experience their own misadventures along with several of their friends. Not only do these two movies bear similarities in their stories but also in their themes and conclusions—which, to me at least, was intriguing. 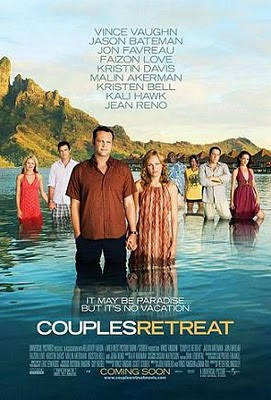 First, both center on married couple with kids who basically have a solid marriage. In Date Night, Phil and Claire Foster have a typical suburban existence—two career family (tax attorney and realtor respectively) with three children and the often hectic and stretched life that brings. In Couples Retreat, Dave and Ronnie have a similar life, with two boys. And while the tedium and exhaustion of making ends meet and balancing careers and family is apparent in both stories, both couples genuinely care for each other and their families.

Then both couples are suddenly blindsided with a confession by another married couple (whom they thought were perfect for each other) that they’re contemplating divorce—and that leaves our couples questioning whether they are in danger of the same thing. This doubt is further enhanced when they are questioned by someone else (a counselor in Couples Retreat and friends in Date Night) as to whether they really do have a good marriage or if they are simply settling for something less.

Interestingly, however, neither couple wavers in their individual commitment to the other. Neither contemplate having an affair or leaving their spouse. While they have their individual frustrations regarding their lives together, their concern and fear is more about whether the their spouse is having regrets or misgivings about their relationship and stage in life. And when each couple eventually confesses to each other their frustrations regarding the lives they share, those frustrations are easily resonated with and universally shared by those in the audience at similar stages in life. And their willingness to hear each other’s confessions leads to a deeper understanding and sympathy for the other—and only serves to strengthen their relationship. (On a personal note, it was this aspect of the film that left me resonating more with—thus, laughing more at—Date Night than Couples Retreat. Perhaps that is because I am closer in age to Carell and Fey; I felt I’d already processed through Dave and Ronnie’s issues, while I resonated more with Phil and Claire’s struggles.)

And, in both stories, it is the relationship and trust that they’ve built over the years that ends up being the very thing that enables them to overcome the plot obstacles in each story. In the end, both couples feel even more confident about their marriages, their families and the life they’ve chosen—flaws and all.

Oh, and one more similarity: each story unfolds within an amazing amount of PG-13-bordering-on-R-rated humor. While there was probably more of this in Couples Retreat, I was more acutely aware of it in Date Night. We rented Couples Retreat at home and watched it after the kids went to bed, but we saw Date Night in the theater where a half a row of teenagers and pre-teens filed in and sat in front of us. The mother part of me continually fought the instinct to cover their ears and eyes during certain parts of the film. Maybe it's because I'm getting old(er), but some of the humor I could really have done without.

But, crudeness aside, I found both films surprisingly uplifting in their themes for a couple of reasons. First, it was interesting and actually refreshing to see married couples who didn’t have to contemplate, come close to or actually cheat on each other to find the value in their love for and lives with each other and their families (though that was the case for the supporting storylines in Couples Retreat).

But even more than that, I resonated with how each story reveals that flawed creatures loving sacrificially (even when it irritates or grates on them) in the ordinary, messy, and mundaneness of everyday life somehow builds a deep, rich life beyond measure. From what we see of both couples, the movies more than hint that--even in the midst of and in spite of their insecurities, imperfections, fears and selfish moments--the strength of those couples’ relationships grew out of years of consistent little everyday choices they made in the best interest of each other and their families (even if sometimes, they discover, that’s simply choosing to acknowledge, appreciate, respect or honor the sacrifices the other’s making for them and the family). And that is a big part of what love is: choosing to act in the best interest of another.

I find it amazing to contemplate how much love makes up for and covers our flawed, broken, selfish blunders and bents. In their own ways, these two stories get at Peter’s words: “Love covers over a multitude of sins” and “makes up for practically anything”—not only the bents and flaws of others but our own as well. It’s as if when we love with the best interest of another in mind (sacrificially), something happens that is greater than or other than the sum of what we put in.

I guess in their own ways, then, stories like this echo how love is a divine thing. If Scripture is right, love originates with God. He is love—and we were created in his image. Broken as that image may be on this side of Eden, part of being human means we know how to love—deep and desperately. And when we genuinely love another (i.e., act in the best interest of another), he’s mixed up in that. And perhaps there’s something of those wide open spaces of his grace and glory that slips through with a little more redemption, healing, growth, salvation and life.

Now, I get that I’m probably reading way too much into these films—after all, they are romantic comedies (and with more than their shares of adult humor, at that). Still, that’s the way I’m bent—I see this stuff everywhere. But, if you can get through the boundary-pushing PG-13 humor, you be the judge. (And, for what it’s worth, you can find reviews of both Date Night and Couples Retreat at Christianity Today—and I definitely also would give the former more stars than the latter).

Who knows? Maybe they’ll bring some God-talk into the open spaces around you, too. But then again, maybe not, heh.