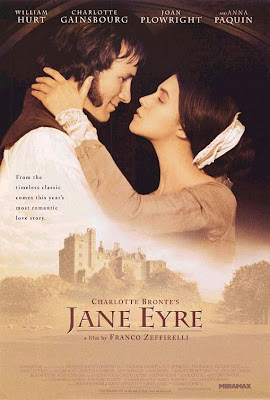 I think Emily and Charlotte Bronte wrote two of the best stories out there. There was a period of time when I faithfully reread Emily Bronte’s Wuthering Heights every year. One Christmas, my husband bought me an ancient, hardback copy of the novel which is now my favorite (I own several). I still open it every now and then to read a page or two. Jane Eyre was harder for me to get through, but I loved the dark passages of Thornfield Hall, the steady fire burning deep inside Jane, the dark and damaged (yet compassioned) Rochester and (in contrast Wuthering Heights) the power of love to free.

So, one night recently, with the children in bed and a cold rain on the window, I stumbled upon this decade-old version of Jane Eyre (1996, which I’d somehow missed, go figure) and the evening’s viewing was determined. It was like slipping under an old, comfortable heavy quilt, reminding me why I loved the sisters’ stories all over again—the dark romance, mystery, longing and surprise of love all mixed up in the brokenness of people and the societies of which we are a part.

The film begins with Jane’s miserable childhood. Essentially an orphan, the strong-willed Jane is abused by her aunt’s family and sent to live in an austere school for girls, where her only friend dies of consumption. She eventually graduates and, after teaching there for a couple of years, secures a position as a governess for the ward (a young French girl) of the often absent Mr. Edward Rochester at the very gothic Thornfield Hall. It doesn’t take long for Jane to realize that Thornfield is hiding a dark secret. In the meantime, a growing attraction grows between the restrained and plain Jane and the brooding yet strangely compassionate Rochester. On their wedding day, however, the dark and tragic secret is revealed, causing Jane to flee Thornhall and leaving Rochester in mortal peril. (For the rest of the story, read the book, see the film, or cheat and go to Wikipedia, heh.)

Critics were mixed on the film (and I get why), and it definitely takes some liberties with the story (for example, the film portrays Rochester as a victim regarding “the secret” whereas he bears more responsibility in the book and Jane’s flight from Thornfall is much more painful in the book than the film). But I found it a fairly admirable attempt to condense the novel into a two-hour movie. I wasn’t sure what it was about this particular version, however, that resonated so strongly with me until I stumbled across this tidbit in a review by Roger Ebert:

What I liked about this version is that Zeffirelli is true to the characters. Rochester never really melts, and Jane Eyre is spared the obligatory glamor shot when she takes her hair down and we realize she was really beautiful all along (as when Joan
Fontaine starred in the 1944 version, opposite OrsonWelles' Rochester). This is a romance between two troubled, wounded people, and by playing it that way Zeffirelli makes it touching, when it could have been recycled Gothic Lite.

I’m drawn to films about woundedness and the power of love and truth to begin to free us (like Walk the Line, Unfinished Life, and Open Range). This version of Jane Eyre reminds me that I too have my own wounds—and that those around me are among the walking wounded as well. It reminds me that love longs to expel darkness, to heal and transform—and none of us need to be wound-free to bring that kind of love into the world. It reminds me to take pause before I judge someone else’s life, that knowing the whole story often brings compassion and understanding. It reminds me that bringing right-ness to life and others is all about love and forgiveness. And, ultimately, all this reminds me of the Author of Love and Forgiveness who is working in this broken world and we broken people to bring Light and Life and Rightness.

All that and it’s one of the most moving romantic stories ever written (in my book, at least). So, the next time a winter rain is tapping at your windows, pull out Jane Eyre and a warm blanket. Chances are, you won’t be sorry. I wasn’t.

(Image: copyrighted by Miramax via the IMP Awards Gallery)