Considering 'The Book of Eli' 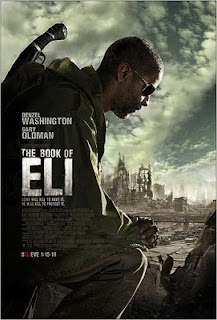 This summer, I finally watched The Book of Eli, a post-apocalyptic film centering on a mysterious sword-wielding stranger who is on a mission to protect an ancient book. The film garnered a rather negative reception when it released, which slipped it onto our wait-until-it-comes-out-on-DVD viewing list. But to be honest, I liked the film. I get where critics are coming from, but I appreciated its Western genre elements and themes, and plot-wise, I enjoyed how all the clues for the twists are there (and there was one twist I didn’t expect). And I also thought some of the God-talk in the film is worth contemplating.

First, I appreciated the moments portraying the power and beauty of the Bible (the Book that Eli is protecting). I especially loved the scenes where Solara and her mother Claudia encountered the text. In their world, there are so few copies of the Bible that most people don’t even know it ever existed. They live in a violent, dangerous and desolate land literally thirsting for hope, and I loved how their faces transformed with eagerness and surprised joy when they heard or read its words. We can get so used to hearing or reading of Scripture that we lose our sense of its beauty. These moments call us to see again its splendor and command—not just its literary beauty but also the truth, just-ness, love and hope those words carry. There are scenes in this film that really get at how God’s truth is living water to thirsty souls. (And I appreciated the attention to detail in that the Bible was usually open to the portions corresponding to Eli’s recitations.)

I also thought the film does well portraying what happens when we seek to use God for selfish gain or power. Carnegie (the film’s villain) manipulates the fears and needs of those around him to build his own little kingdom, and he wants a copy of the Bible in order to expand his control and power. But when he finally has it in his grasp, he is in death’s grip and the Book slips through his fingers like dust even as the kingdom he created falls apart. It reminded me very much of the Old Testament stories about the capturing of the Ark of the Covenant. My 7-year-old son and I recently read the story of how the Philistines captured the Ark from priest Eli’s power-hungry and greedy sons (another example of those seeking to use God’s power for their own glory and gain and having it all—including their very lives—slip through their grasp). But they do not get the power they expect—in fact, one bad thing after another ensues and the Philistines send the Ark back on a ox-pulled cart laden with gold.

While the film has a strong Old Testament flavor in its portrayal of Scripture and God (which isn’t surprising considering its Western genre elements), aspects of the rest of the Story do leak in. I particularly appreciated the moment when Eli realizes that he’s gotten sidetracked from the point of his mission, that it isn’t about protecting the Book as much as it is about living out its truth, particularly when it comes to how he views and treats others in his journey:

In all these years I've been carrying it and reading it every day, I got so caught up in keeping it safe that I forgot to live by what I learned from it.

I really resonated with this. Current church culture is too often plagued by a fortress mentality and our personal lives are full of agendas and missions. I find Eli’s realization an invitation to us to consider whether these and others things are distracting us from the real purpose of our own lives: loving God and loving others as we go.

I also appreciated a few other elements and moments in the film—like the way this story suggests that the way God carries out his plans is often not the way we think it will be. And I appreciated Eli’s observation that we have so much that we don’t know what is precious and what isn’t. And Eli’s advice to Solara—that if if she hates the place she’s at, then change it—is just as applicable to us.

The film has its limitations and weaknesses—like its reliance on the myth of redemptive violence rather than ultimate power of love or sacrifice and its portrayal of faith weak in rational basis—but nonetheless I think it brings some good God-talk into open spaces .

Word of caution: This film is rated R and contains adult content, language and graphic violence.