A curtsey to ‘The Queen’ 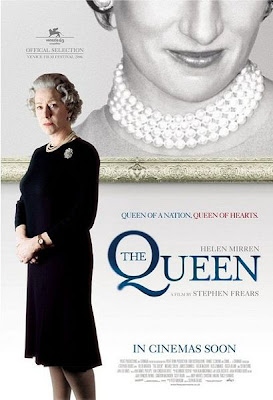 Oiy, talk about the best films of 2007 is already beginning to appear and we’re still trying to get through our NetFlix queue of last year’s nominees and winners. Recently, we finally got to one of those: The Queen, which received very high critical acclaim and multiple awards, including an Oscar for Helen Mirren’s performance in the title role—a well-deserved recognition, in my (very) humble opinion.

The film is a very personal glimpse into the life of the Queen in the year following Princess Diana’s death along with the rise of the newly-elected Prime Minister Tony Blair. After seeing the film, I was struck by how strongly the film’s poster portrays a dominant thread in this story: Diana’s life and death loomed larger-than-life above all Britain—including the Queen. Until this film, however, I didn’t even think about how much that affected the Queen and her life. My focus, like most of the world, has always been Diana. This film underscores for me the power of learning another’s story—a process that occurs not only in the film but also in me, the viewer.

When the film begins, Blair’s perception and opinion of the Queen is one very much formed outside the walls of Windsor. Both he and his wife are impishly critical of the Royals and their way of and approach to life and the country. However, as he spends time with the Queen (albeit limited) and especially in her world, he gradually grows in sympathy for her and the effect of the crisis of Diana’s death has on her. 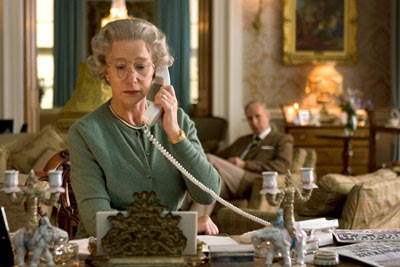 The same thing happened to me. I am one of the many who continues to be captivated by Diana and I’ve made (much) more than one exasperated comment critical of the Royals in their treatment of her. But this film, while fictional, invited me to consider the story from another perspective. The film didn’t excuse the treatment Diana received at the hands of Charles and the Queen—and in fact, as some critics noted, it shows the Royals were reaping in some part the consequences of their choice to excuse Charles' behavior and treatment of Diana. But this story—and Mirren’s performance—significantly humanizes the Queen and made me realize the story goes much deeper than the relationship between Diana and the Royals. Walking in the Queen’s world for a couple of hours and watching her struggle with her personal distaste for Diana in the context of her deep sense of responsibility and care for Britian enabled me to see her as a person with her own failings and goodness rather than a cardboard political figure. And her decision to go with her responsibility for her people rather than her own personal feelings has significantly changed my opinion of her. Never again will I think of her historical televised appearance from London the same.

This story is a good reminder of something we need to keep in mind in our own lives. Many times we judge someone by what we see them do in a moment or slice of time. But everyone has a story. One moment is a combination of many others leading up to that point. Often times, knowing that story helps us understand and see them as they are: struggling, wounded and broken. And that often touches our own woundedness and brokenness, which gives us a context in which to relate to them. We don’t have to agree with them and it doesn’t by any means excuse actions that hurt others or the consequences we must bear for those actions, but it does enable us to respond with Love, the kind of Love we are Loved with—by a God who knows our story and works to invite us into the True Story, a Love Story. For it is as we love others that we invite them into that Story and God’s Love—and that is what our lives are all about, folks.

So, here’s a deep and respectful curtsey to The Queen.
(Images: Miramax)