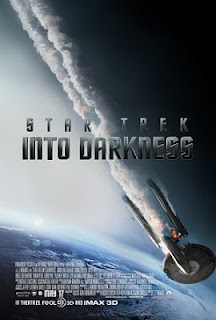 I’ve been a Trekkie since childhood. I was thrilled when J.J. Abrams' rebooted the franchise with Star Trek in 2009, and personally, I find Star Trek: Into Darkness an engaging follow-up. While it doesn’t seem to carry the same impact or weight of the first film (others explore that much better than I could), I enjoyed it. And it offers up a few good morsels that bring God-talk into open spaces—in particular the role of humility in transformation and the persistence of destiny in Abram’s universe.
In the 2009 Star Trek, the original Trek-universe timeline is altered due to the time-traveling Nero who changes key events in the lives of several original Enterprise crew members—including killing Jim Kirk’s father and destroying Vulcan. Despite the alterations, however, the original crew still end up the Enterprise, form their destined bonds that define and transform them, defeat Nero and save Earth from destruction.

Star Trek: Into Darkness picks up with the crew just as Kirk loses his captain chair for violating the Prime Directive on a primitive planet. Kirk’s mentor, Admiral Christopher Pike, narrows Kirk’s failure down to his lack of humility and his penchant to “play God,” concluding, “You don’t respect the chair because you’re not ready for it.”

However, Kirk is reinstated as captain after terrorist John Harrison attacks a gathering of Star Fleet officers and kills Pike. Admiral Alexander Marcus sends a vengeful Kirk on a mission into Klingon space to kill Harrison, but several of Kirk’s crew convince him to capture and return Harrison to Earth for trial instead of assassinating him. When Kirk discovers Harrison’s true identity and investigates further, he starts to question his original orders and Marcus’ motivations—as well as his own.

Kirk’s transformation is the main focus in this film, but I like how Abrams continues to explore how the relationship between Kirk and Spock transforms them both—and how humility plays a role in that.

I also appreciate the contrast between Kirk and both Marcus and Harrison (a.k.a. Khan, arguably the most celebrated of Kirk’s adversaries in the original timeline). In both, we see who Kirk could become if he doesn’t heed Pike’s advice:

“You think the rules don't apply to you,” Pike tells Kirk in the beginning of the story. “There's greatness in you, but there's not an ounce of humility. You think that you can't make mistakes, but there's going to come a moment when you realize you're wrong about that, and you're going to get yourself and everyone under your command killed.”

Balancing rule and law with doing what is right is a delicate thing. While the definition of what is right and good varies in this story (as this article in Psychology Today points out), Pike’s words remind Kirk (and us) that humility is key in making those decisions—and also in our own transformations if we are to become better people.


Marcus and Khan illustrate the extremes of what happens without that humility. Khan’s arrogance is particularly lethal as it is infused with vengeance. While he portends his focus is saving his own “family,” he’s willing to risk their lives in pursuing his revenge.

Marcus is obsessed with security. He sees the Klingons as Earths’ biggest threat and believes starting a war the quickest way to eliminate them. He is willing to use and sacrifice the lives of others for his goals—with the Enterprise and her crew first on the altar.

He allows the character strengths and advice of his friends to influence his choices, particularly Spock. He learns to make choices in the best interest of others and not just his own desires, best interest or ends.

In the end, he makes a most powerful choice—one quite opposite from his adversaries and one marked by humility: laying down his own life to save others.


Kirk’s final choice is an intriguing reflection of the original timeline. Unlike many others, I appreciated the reversal of roles between Spock and Kirk. It allows a deeper exploration of the transforming friendship between these two characters whom we’ve known for so long. We get the chance to see and know them even more fully than before, especially Spock. I can’t help but wonder if Spock Prime wouldn't take some moments of introspective reflection after he learned of Kirk’s sacrifice.
I also appreciate how this part of the story affirms the persistence of destiny in Abram’s Trek universe. If there are any questions left regarding whether the first film’s “coincidences” were actually intentional in creating a sense of destiny, this settles it.

I like how these two films explore one of my favorite theories of time. As I mentioned in my post on Star Trek, it’s best articulated in Deja Vu where a scientist uses the image of river to describe time:

“The traditional view of time is linear, like a river, flowing from the past towards the future.” When another character asks if you change the course of the river, she replies: “Introduce a significant enough event at any point in this river and you create a new branch, still flowing toward the future, but along a different route. Changed.” In other words, an alternate timeline.

But another character suggests something different, that the river of time “is the Mississippi” and any changes we make are the equivalent of “lobbing what amounts to a pebble into it.” He concludes, “That's a very few tiny ripples in a kind of big body of water, don't you think.”

I like this image of time as a river, flowing from the past towards a future. Whatever rocks are thrown or dropped into the river can change the flow around the rock (change some events in time) but not the flow of the river as a whole. Time flows en masse together towards the same end. This kind of approach to timelines resonates with me because it echoes and makes the most sense in context of the larger Story of which we all are a part:

If Scripture is right, we know how the larger framework of the Story ends, this river of ours moving towards a sea of endless boundary. Though evil and darkness throw pebbles, stones and even drop boulders into that flow, the waters of time—permeated with God’s love, goodness, just-ness and right-ness—flow around it towards redemption, renewal and life. There is an abundance of free will within that flow, but nothing will change where that Story is going.

While the first film is more about the rocks lobbed into the river and this one is more about recovering the flow, the river of time in Abram's universe flows en mass towards the same end.  While Star Trek: Into Darkness doesn’t have the same wonder and weight of its predecessor, I appreciate how it continues the sense of free will and destiny as well as the significant roles our relationships and humility play in transforming us. In reinforcing how much the crew (particularly Kirk and Spock) need each other not only to survive but to save others as well, it also reminds us of our own need for each other in our own Story—and how that grows humility in us, too.