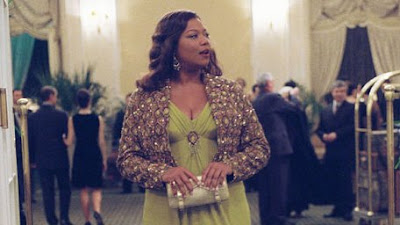 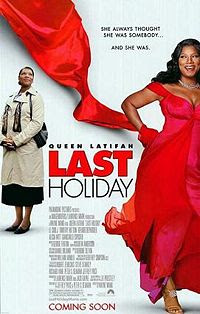 The other night, I caught Queen Latifia’s 2006 comedy Last Holiday, a story about a woman who’s told that she has but weeks to live and spends them living out one of her dreams. It is a predictable but nonetheless charming, life-affirming and feel-good tale—and one that brings more than a little God-talk into open spaces.

Georgia Byrd (Latifa) is a shy, unassuming, church-going and good-hearted woman who works in the cookware department of a department store and harbors a long-time crush on one of the salesmen there. On her off hours, she creates culinary masterpieces, serves them to a neighbor boy, and puts pictures of them in a journal she calls “Possibilities” along side brochures and pictures of places she like to go and things she’d like to do. When she hits her head at work and gets a CAT scan, she’s told she’s in the late stages of a fatal disease. After a series of failed attempts to share her news with those around her and a growing sense of frustration, Georgia decides to cash out all her assets and live out her last few weeks on a dream vacation at a resort that boasts a renown chef she’s always respected—and it’s there that Georgia starts to understand how life is meant to be lived. 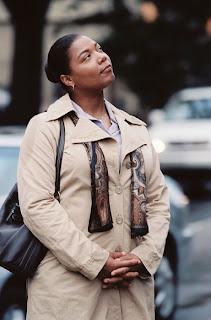 One of the things I really appreciate about the film is Georgia’s ongoing dialogue with God—which goes very public early on in the story, right after she gets the news from the doctor. She’s in church, standing in the choir when all her emotions come to the surface. Previously content to be in the background, Georgia launches into a front-and-center impromptu and song-filled dialogue with God, asking “Why me?!” She essentially argues with God, declaring that she’s played by all the rules, that she’s been a good person (and she is)—so why is she the one to suffer? But Georgia doesn’t stay angry. Even though she doesn’t understand her situation, she maintains her conversation with God, periodically looking heavenward with a comment and often with a smile, sometimes wry but usually with affection.

While it is a minor thread in the story, I find this ongoing dialogue puts the story in a context that invites us to consider that God is present and active in Georgia’s life—and invites us to explore how God uses even bad experiences to reveal himself and Truth to us.

That Georgia keeps the lines of communication open on her end is significant. She struggles with the unfairness of her suffering, but she doesn’t reject God as uncaring or absent. God, for Georgia, is still good—even if she's hurt, frustrated with and angry at him. And she begins to learn some truths, and that not only changes her but those around her. She learns that life is unspeakably valuable. It’s not meant to simply be lived through but embraced with joy as the gift it is. And while Georgia has always paid attention to and seen the good in others, her sense of the value of people deepens—even of those who would do her harm.

And others are drawn to Georgia’s no-holds-barred approach to life and touched by her genuine attention. Georgia really sees and pays attention to those she's with; she’s “in the room,” even with those who are mean or deceptive towards her. In other words, Georgia loves them. And as she learns the value of life, she also starts speaking truth in that vein to those she encounters. As they seek her out, she doesn't shy away from firmly but lovingly confronting them with their harmful behaviors and invites them on a better path. She’s not doing that intentionally as much as it flows from who she is—and who she’s becoming. And she’s willing to learn from and hear the truth from others, too.

In the end, life and love win out in this film. And I can’t help but think that this film echoes God’s desire, longing and design to give us and use whatever circumstances come along to help us discover real and true life—one filled with love from above that can’t help but flood out on those around us (and on to us, too). And whether we have a few short weeks or many years, that’s a good life.