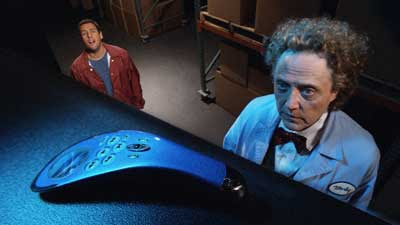 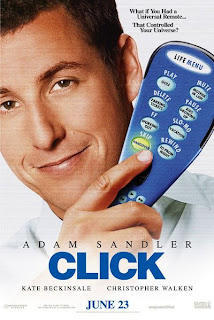 While I was visiting a friend in Virginia recently, we watched a couple of movies—one of them the Adam Sandler flick, Click.

A bit of a modern Christmas Carol or It’s a Wonderful Life, the film follows Michael Newman (Sandler), a married father of two young children (with a stretched-to-the-limits but beautiful and understanding wife) who is overwhelmed and embroiled in career survival and family responsibilities. Then, just as the pressure cooker of his life begins to explode, he encounters Morty (Christopher Walken), an angel (albeit a very excentric and somewhat crude one) who hands him a universal remote control that can freeze, rewind, and fast-forward through parts of life.

It is the latter aspect that at first exhilarates Michael, who giddily discovers he can fast-forward through unpleasant events, like dinner with his folks, his kids’ sleepovers, a nasty cold—and spending the weekend toiling over a project his boss uses to threaten him with termination of employment if he fails and promotion to partner if he succeeds. While his body participates in the events and completes his projects, Michael himself sees only flashes of this happening (like the fast-forward action on a DVD player). His fast-forwarding self is on a kind of “auto-pilot” during those times, leaving Michael without any memories of what he said or did.

Soon, however, Michael finds that along with missing and not having to deal with the unpleasant moments in those days through which he fast-forwards, he also misses the good times. In addition, he discovers that during those times on auto-pilot, he often said and did things that supported his career advancement and neglected and hurt his family. When he tries to get rid of the remote to stop the damage it's causing to his life and his family, he finds he can’t control it and the periods he fast-forwards through grow longer until he’s reached old age—a time of career and monetary success but dramatic family failure and loss.

While Click’s frat-boy humor (which, unfortunately, seems to be a staple in most of Sandler’s comedies) caused some very heavy sighs on my part, I found some apt insights in the film—especially in the latter half of the film which is more sobering than the first. 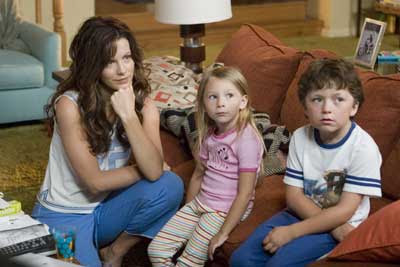 In particular, I think the film really gets at the pressure, anxiety and just-pain-crap (excuse my French) that many fathers (and mothers) face in their careers. Michael isn’t a power-hungry career-advancing man; he just wants to survive and do well and give to his family what he felt like he should have had as a kid (which isn't as bad as he thinks, he discovers). But in his work world, he’s surrounded by people whose main interests are money, power and pleasure, people who use others as a means rather than seeing them as an end. It’s a rotten place to work and live in, and it makes people like Michael—a man whose basically good and loves his family—miserable.

But once he engages that world and finds moments of success on its terms—a.k.a., he starts to play by its rules—he gets a rush (at least in the short term) and begins to focus on that success more than his family. And by going on auto-pilot as he fast-forwards, Michael is doing the equivalent of what many of us do when we narrow our focus to an event, project or goal in the future and ignore and/or refuse to deal with the people, ethical dilemmas and relationships in the present. And that begins to break apart his family and Michael himself.

And that’s a great aspect of Click. It shows how choosing to live by that world’s rules damages us and the people we love—and how we too often become like the very people and system that oppressed us to begin with. And like Michael after he’s fast-forwarded, we get those moments of clarity when we realize that we’ve auto-piloted our way through days, months, weeks or years when we’re confronted by the damage we left in our wake.

While the film has some cringe-able moments due to its crude humor (and it’s really not the best of Sandler, who I think is definitely talented enough to drop the frat-boy stuff from his work), I found it did a good job of illustrating how playing by the rules of this world (one of me-first, pleasure-first and power, wealth and influence over people)—even with the best of intentions—quickly becomes a slippery slope, how easily we begin to lose sight of what’s important (in this case, family and relationships) and how rapidly it begins to hurt the very thing we thought we were doing it for in the first place.

(Note: This film is rated PG-13 and contains crude and potentially offensive humor along with sexual situations and scenes.)