Choices and who we are 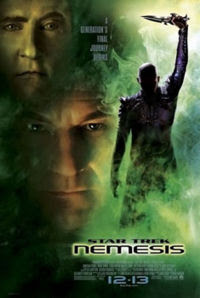 Recently on TV, I caught Star Trek: Nemesis (the tenth Star Trek movie and the last one featuring the Generations crew). To be honest, though I’d seen the film before, I didn’t remember much about it—but this time, I found myself captivated by the central theme of the story.

The film centers on Captain Jean-Luc Picard’s discovery that he has been cloned and that man—Shinzon, a spitting image of Picard when he was younger—recently wiped out the entire Romulan senate. Unlike Picard, Shinzon had a horrific upbringing, discarded by those in power after their priorities changed and sent to work as a child in the mines of hell-like Remus as a slave. However, the Remans took him in and raised him; together they worked their plan to take over the Romulan government—and one that includes destroying Earth and the Federation.

Picard struggles with the dilemma that Shinzon poses to him: While Shinzon and he share the exact same physical makeup, they are drastically different people. At one point, Shinzon has captured Picard and placed him in restraints in order to extract his blood to cure a side effect of the cloning process that will ultimately result in his death if not treated.

Picard: Are you ready to plunge the entire quadrant into war to satify your own personal demons?

Shinzon: It amazes me how little you know yourself.

Picard (with emotion): I’m incapable of such an act.

Shinzon moves closer to Picard, his face inches from away.

Shinzon: You are me. The same noble Picard blood runs through our veins. Had you lived my life you’d be doing exactly as I am. So, look in the mirror. See yourself.

Shinzon: Consider that, Captain. I can think of no greater torment for you.

Shinzon turns and walks away towards the door.

Shinzon stops, but doesn't turn around.

Picard (now staring directly at Shinzon): I’m a mirror for you as well.

Shinzon turns to look at Picard.

Shinzon: Not for long. I’m afraid you won’t survive to witness the victory of the echo over the voice. 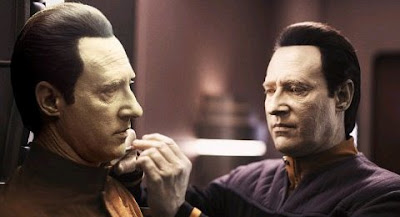 Later, after Picard has escaped, he has a conversation with Data about Shinzon’s claim that he would have made the same choices as Shinzon had he lived that life.

Picard: If I had lived his life, it is possible I would have rejected my humanity?

Data responds, mentioning the android B-4 that they’d found on a planet earlier in the film.

Data: The B-4 is perfectly identical to me, although his neural pathways are not as advanced. But even if they were, he would not be me.

Picard: How can you be sure?

Data: I aspire, Sir, to be better than I am. B4 does not—nor does Shinzon.

There are a couple of things that resonate with me in these conversations—the discussion of what it means to be human, and how our choices make us who we are.

The Star Trek universe has always had a great hope in the potential for humanity. While Gene Rodenberry based his utopian themes on a more humanistic philosophy, I find a core of truth in this hope. As a follower of Jesus, I believe at the beginning of the Story we were all created in the image of God, and while we are cracked or broken in this part of the Story, we carry within us the echoes of that image. It is what makes us long for justice, right-ness and to love. It is, if you will, what makes us aspire to be better than we are.

According to Jesus, we now have the opportunity to work with God to actually be better than the broken people we were born as. Jesus tells us we can now live the kind of life we were created for and become the kind of people we were created to be. But that kind of life takes choice—one right after the other. Choices every day to choose to trust that God is who says and can do what he says. Choices to work with him in becoming the kind of people he created us to be—people who love, witness and fight against injustice, work towards right-ness, walk with grounded hope and move in love.

It isn’t just one choice, but one after another—and we can start making the choices that bring life instead of death at any moment in our life. Which is why I like the following scene, which comes a few moments later in the film, when a holographic Shinzon appears in Picard’s ready room after Shinzon’s war ship has fired upon the Enterprise.

Picard: Look at me, Shinzon. Your heart, your hands, your eyes are the same as mine. The blood pumping within you, the raw material, is the same. We have the same potential.

Shinzon: That’s the past, Captain.

Picard (intent): It could be the future. Buried deep within you, beneath all the years of pain and anger, there is something that has never been nurtured: the potential to make yourself a better man—and that is what it is to be a human. To make yourself more than you are.

Picard: Oh yes, I know you. There was a time you looked at the stars and dreamed of what might be.

Shinzon’s face softens and he smiles a little, but then looks away.

He looks back at Picard, gesturing to himself.

Shinzon: I am what you see now.

Picard: I see more than that. I see what you could be. A man who is Shinzon of Remus and Jean Luc Picard could never exterminate the population of an entire planet. He’s better than that.

Shinzon: He is what his life has made him.

Picard: And what would you do with that life? Waste it in a blaze of hatred? There is a better way!

Picard walks towards him, hope blazing on his face.

Picard: Never! Never! You still have a choice. Make the right one—now.

Shinzon: I can’t fight what I am.

Picard: Yes, you can.

Picard takes a step closer, but Shinzon backs away, his face hard.

Shinzon: I’ll show you my true nature. Our nature. And as Earth dies remember I will always forever be Shinzon of Remus. And my voice shall echo through time long after yours has faded to a dim memory.

This is a pivotal moment for Shinzon. He has a choice—to continue walking down the same path as he has been or to turn around. Repent—or as Mark Scandrette puts it in Soul Graffiti, “call into question our previous ways and awaken . . . to new possibilities.” Choose to embrace a new way of thinking and living. And Shinzon even has evidence that his choice will pay off standing right in front of him: Picard, who indeed does act as a mirror for him. But Shinzon chooses his own way, one that ultimately leads to destruction and his own death as well as the death of others.

This scene made me ask myself just what kind of mirror I present to others—and what kind of mirror I am called to be. Ultimately, aspiring to better than we are includes putting others and their needs above our own. Or, as Jesus puts it: “Greater love has no one than this, that he lay down his life for his friends.” In this film, that mirror plays out best in Data, who at the end of the story saves Picard’s life while sacrificing his own to save not only his friends but many, many more as well.

I really appreciated how the theme of what it means to be human (and how the choices we make play out within that) weave and play throughout the story, culminating in Data’s sacrifice—one that creates a powerful image that ultimately swallows the deadly objectives of Shinzon’s choices. As a follower of Jesus, I can’t help thinking of Jesus’ own sacrifice and his call to love others as he does—and how his Spirit resides in us so that we are enabled to love like he does.

So, while this film didn’t seem to make a big impression on me the first time, it has now become one of my favorite stories in the Star Trek universe (along with all the other even-numbered films, heh).

Now, let’s see what Abrams can do with the next one, heh.