A few thoughts on ‘Casino Royale’ 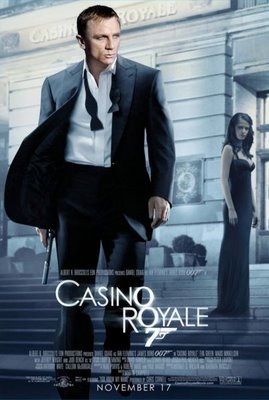 My husband and I saw the new James Bond flick last night, and I must agree with the majority of critics out there who say this latest addition to the franchise is pretty darn good. It’s getting a whopping 96% at Rotten Tomaotes, where you can find links to a plethora of mainstream media reviews.

The film’s elements—story, script, pacing, etc.—are firing on all pistons, not the least of which is the film’s star, Daniel Craig. As Christianity Today reviewer Todd Hertz says, “Daniel Craig is Bond.” The stunts in the sequence just after the opening credits are mind-blowing, and while there aren’t as many gadgets, the devices (and the car) are still cool. More importantly, however, the story is also good—more depth, complexity and grit than we’ve seen in the franchise for quite some time. We get to know Bond at his beginnings, and the struggle he has within himself is captivating and well-done. (Heh, I was so intrigued by the story that when I got home, I ordered a copy of the book.)

As well done as the film was, however, I agree with at least one reviewer that the love story between Bond and not-your-typical-Bond-girl Vesper Lynd felt flat. It didn’t work for me. Maybe it was a lack of chemistry. Maybe it wasn’t given enough time. Or maybe it was the way it was executed. Whatever it was, it left me a bit disappointed as it is one of the more crucial parts of the story in explaining why we have the Bond we do. Also, the violence in the film is more graphic and grittier than previous Bond films. While this type of violence is in line with the film’s new tone, I could have done without some of it, especially the torture scene.

Overall, however, the film has a solid story, complex characters and good filmmaking—and that allows for some good themes to play throughout and some good questions, which Hertz picks up on at the end of his review. Questions like: Are there jobs in the real world that require people to, as Vesper says, "switch off" morality? What does that do to a person? Can bad deeds be good if they are done for the overall good? Hertz also observes that the world of this Bond is lacking a clear “good” and “bad”—a concept often seen in pop culture. Why is that? Is the world more black and white than this? Either way, how do we deal with the answer?

It’s probably because of questions like these that I’m still ruminating over the film today. It’s questions like these—which I also find in favs-of-this-blog television shows like Heroes, Battlestar Galactica and Smallville—that we all face at some point as we decide what we believe, what road we will walk, and ultimately, what God we will follow. And good stories like this one help us ask and work through those questions. And that’s part of the reason films like this show up on this blog.