The power of knowing the Story 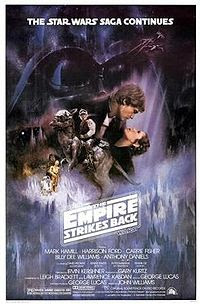 Saturday morning, I watched Star Wars V: The Empire Strikes Back with my kids. We own all the original films and I’ve seen them more times than I can count—and we’ve all seen the more recent prequel trilogy numerous times as well. As I watched the story unfold, it dawned on me again how I can’t watch any of the original Star Wars trilogy without being informed by the newer Star Wars I, II and III films that tell the story of the years before—and how that affects my own understanding of and relationship with our own Story and its Author.

For example, as we watched Yoda interact with the young Luke Skywalker on Dagobah, my kids asked me why Yoda—a great and powerful Jedi master—would act like he was so simple and, well, dumb. I told them that perhaps he acted that way in part because he knew who Luke was but he didn’t trust him yet; look what Luke’s father (Anakin, now Darth Vadar) had done to the Republic and the other Jedi. As they’ve both seen the newer films that tell those parts of the story, that made sense to them.

But I was also struck by how I identify so much more these days with Ben Kenobi and Yoda, who are both physically dead by the end of Star Wars VI. When my daughter asked me who my favorite character in the original films was, I remembered how as a kid I’d wished my hair was long enough to wear like Princess Leia’s and how I’d been alternately infatuated with Han Solo and Luke; but now, I was drawn more to the older characters—especially Kenobi and Yoda.

In these films, Kenobi and Yoda, who were front and center in the newer prequel films, are now the previous generation. They played vital roles and shaped so much of the history of the story, but their part in it was coming to an end. I used to think there might be a profound sense of loss in this kind of aging, but instead Yoda and Ben exhibit steady wisdom and the ability to use that wisdom and their power to help and guide the younger—who stumble through the story as the young do, profoundly less wise and much more rash and cocky than their elders. Yoda and Ben know their protégés will make mistakes (even as they themselves did in their younger years), but they also know that this is part of the journey through life and towards wisdom. They resist the temptation to try and control the people and world around them—to do it themselves. They know that if the story is to continue towards good and justice, it will do so through that younger generation.

Significantly, they exhibit a certain amount of faith in how the story will play out. Not that they don’t doubt. The prophecy doesn’t play out like either of them had thought it would; in fact, they seem unsure if it will now play out at all. When Luke makes the decision to leave Dagobah to save Han and Leia, both Yoda and Kenobi are worried and even pessimistic. Knowing what they’d seen and experienced in the years before, it makes a lot of sense. They even try to do things differently than before, by trying to train Luke in the isolation of Dagobah. But, in the end, they let Luke go, giving him last minute advice which we now see drips with the history of what has come before. How much richer and more significant it is now than when I first saw the film.

Watching Kenobi and Yoda made me think about the power in knowing the whole story. While Kenobi and Yoda’s parts in the story are significant, much of their wisdom comes not only from their experience but from knowing the even larger story and that their lives play out but small parts in that. And that—especially in this film and Star Wars IV: The New Hope—permeates and informs almost every one of their words and actions.

And that makes me think about the Story and how knowing it offers a similiar road to wisdom for us. For the younger of us, do we listen and pay attention to those elders that display the wisdom and character that comes from experience in and intimately knowing the Story? For the older of us, are we willing to embrace the truth that the Story continues towards good and justice through the younger generation? Do we give them the room to make mistakes and learn from them as we did? Do we understand that our roles are but a part in the larger Story or do we give into the temptation to control the people and world around us? And, perhaps most importantly, are we confident enough in Author of the Story, even in the darkest days, to trust that he will lead it to the end he promised? Because how we answer these questions will permeate and inform our words and actions. It will reveal who—and whose—we are. And that will affect and influence the people and world around us.

I’ve always loved the Star Wars universe and story. I enjoy how my affection for and appreciation of the characters change as I change, and how this story continues to challenge and deepen my understanding of and relationship with the Story and its Author—and how that brings God-talk into open spaces.

(Images: poster for and screenshots from The Empire Strkes Back, copyrighted 20th Century Fox)