March 27, 2008
I started keeping track of my movie-watching this year and here are some highlights from last month (yeah, it’s almost the end of March, but it’s just been that kind of month). I’ve already highlighted some of them in individual posts (like The Legend of Bagger Vance, Knocked Up and Jaws), but here are a couple I never got around to posting about: 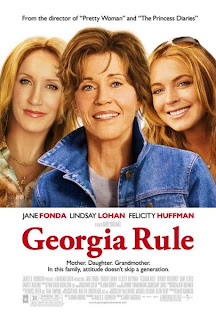 Georgia Rule (R). There’s a lot I liked about this film, which focuses on the relationships between rule-abider Georgia (Jane Fonda), her alcoholic daughter Lily (Felicity Huffman) and rebellious granddaughter Rachel (Lindsay Lohan)—in particular, how they deal with Rachel’s confession that she’s been molested by her stepfather. While the subject matter is definitely adult-themed, the film also has its gentle and loving moments. I resonated with the depiction of life as really messy, the brokenness and woundedness we all walk around with, how we show love, what love is and isn’t, and how the power of knowing someone’s story changes the way we perceive them. I also loved the layers of what is meant by “rules” explored in this film. For example, rules can be the regulations we lay out to put order to our lives (ie, dinner at 6:00pm or nothing until breakfast) or rules that regulate or guide our behavior to keep us and others from harm (avoid alcohol, keep sex inside marriage), but they also can be axioms or truths in reality—like forgiveness brings life, love and freedom (a key “Georgia rule” in this film). The film also explores what happens when we try to regulate everything in life as well as when we reject rules all together. And all this challenges me to examine my own life: What are the “rules” I live by? Which ones are out of a need to feel control on my surroundings? Which ones are out of truth, born out of the Love I am loved by? And which of those axioms do I have yet to embrace? The film has its flaws (the line uttered about faith by one of the religious characters still makes me grind my teeth) and its subject matter is not easy to deal with (so take the film’s MPAA rating seriously), but overall I appreciated and enjoyed the film. For a good review of the film from a Christian perspective, see Camerin Courtney's review at Christianity Today. (Image: Universal) 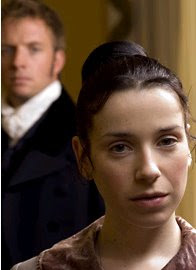 Persuasion (PBS/BBC). My husband and I enjoyed the PBS Masterpiece Theatre series on Jane Austen, and I particularly liked the take on Persuasion (which actually aired in January, but we didn’t see until last month). My favorite Austen character is Anne Elliot. I am always moved by her struggle with the weight of the consequences of a decision she was persuaded to make at a young age (to reject Wentworth, a good man whom she loved and who loved her). How many of us haven’t made decisions that we later regretted? Yet Anne learns from her mistake and faithfully lives with the hope, courage and strength and that draws my respect and empathy. And the beauty of Austen’s stories is that the world is set right and the heroine’s virtue, humility and integrity rewarded by the end of the story—and I feel that in Anne’s story most of all. And that always makes me think of the Great Story and how all will be set right and hope become reality. Good stuff. (Image: BBC)

For the rest of the films I saw last month, go here. For January’s highlights, go here.

As always, use discernment in your film viewing. Some of the films I’ve seen and enjoyed (like the above Georgia Rule) nonetheless contain offensive scenes and language. It usually pays to spend some time researching a film before you see it.