My 'Night at the Museum' was a good one 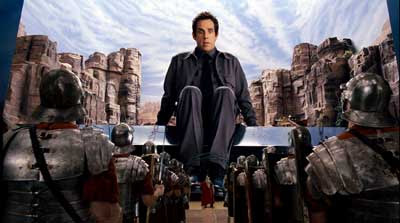 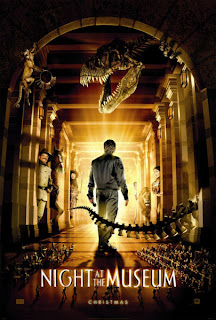 We finally got around to seeing Night at the Museum last night—and we enjoyed it. The film follows Larry, a divorced father who reluctantly takes a job as a museum night watchman in order to pay his rent so he can keep joint custody of his 10-year-old son. Only the job doesn’t turn out to be the bore he thought it would. Due to the runes on an ancient Egyptian tablet, everything in the museum comes alive when the sun goes down and then returns to their displays when it rises—and it’s Larry’s (often hilarious) task to keep order.

It’s a unique and fun idea for a film, something I would have loved to experience as a kid (or as adult, for that matter). It’s much tamer than Ben Stiller’s usual fare and I really enjoyed being able to watch without waiting for the next crass joke to come along (although a few do pop up here and there). For that matter, it was a nice change to watch a film where dinosaurs weren’t out to eat everything that moves and mummies weren’t evil despots seeking to enslave the world (though, I must confess, I really like those films too, heh). 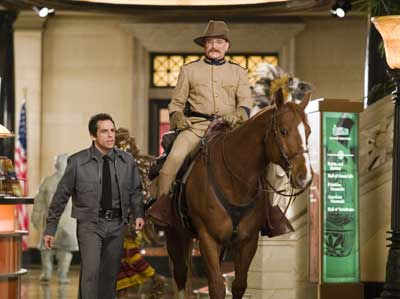 Though it stands on its own as an entertaining story, there were several aspects of the film that reach a bit deeper—in particular a scene between Larry and the come-alive statue of Teddy Roosevelt (Robin Williams). It’s Larry’s first night and he’s beside himself, feeling completely overwhelmed by his crazy, chaotic and bizarre situation. He’s just spent most of the night running from one thing or trying to lock up another. He’s exhausted and ready to quit.

“Some men are born great,” Roosevelt tells Larry. “Others have greatness thrust upon them. For you, this is that very moment.” Larry's absurd situation is definately not a context in which we're used to hearing those words. And Larry certainly doesn't see thing Roosevelt's way. All he sees is a mess, chaos and something he’s dying to get out of.

I really like this scene. Often, moments for greatness do take place in a mess, in a place where we’re just struggling to survive, much less do something great. In fact, ordinary, everyday life can feel like Larry’s first night in the museum (at least it does if you are a mom with two kids)—and everyday life brings those chances for greatness.

Interestingly, the great moment for Larry comes when he stops trying to contain or stay-ahead of the mess and instead starts helping his new friends come together for a greater cause (a twist in the film I won’t reveal). And that speaks to us too. We also experience moments of greatness when we stop trying to contain or stay ahead of the mess of life and work towards a greater purpose. As followers of Jesus, that purpose is loving God and others. Chances for greatness occur when we choose to trust God and take the opportunity to love another instead of living out of our own desires or agenda at hand. These may not feel like great moments, but in reality any moment like that advances the Kingdom—and that makes it a great moment.

There are other aspects like this sprinkled throughout the film (ie, the value of knowing our history, making choices for the benefit of one’s family, etc.), and that makes it a film worth adding to my sidebar.