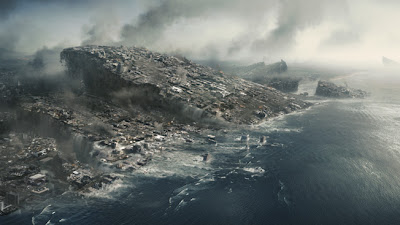 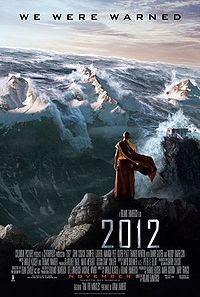 There are days when I’m really glad I don’t make my living as movie critic—unless of course, I could be Roger Ebert.

Yesterday I saw Roland Emmerich’s ultimate disaster movie 2012 and, quite frankly, it was some of the most fun I’ve had at the movies this year. There were whole chunks of time where I literally forgot I was watching a movie—and that itself is worth the price of a ticket. But most critics panned the film, and I doubt I’ve either the clout or the connections to publish a review to the contrary.

But Ebert did, bless him. “2012 delivers what it promises,” writes Ebert, “and since no sentient being will buy a ticket expecting anything else, it will be, for its audiences, one of the most satisfactory films of the year.” And indeed, it was so for me. 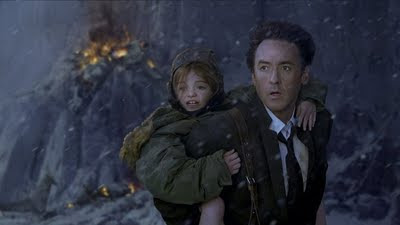 2012 is, as Ebert puts it, “the mother of all disaster movies (and the father, and the extended family).” In the classic disaster film model, the film follows a variety of people—from scientists (Chiwetel Ejiofor), world leaders (including Danny Glover as U.S. President and Oliver Platt as his ethically challenged Chief of Staff) and a rich Russian father (Zlatko Buric) to a conspiracy radio talk show host (an almost unrecognizable Woody Harellson), Buddhist monk (Osric Chau) and an American family—whose lives intersect as the world begins to experience one disaster after another as the temperature of the earth’s core increases. Most of the story is seen through the eyes of struggling novelist Jackson Curtis (John Cusack), his divorced wife Kate (Amanda Peet) and their two children Noah (Liam James) and Lily (Morgan Lily).

This film is the mother of all disaster movies in several ways. First, its special effects are beyond amazing, and Emmerich executes them well. More than once I caught myself pushing back into the seat as one character after another struggled to dodge or outrun cavernous earthquakes, chunks of earth and fire reigning down from the sky, massive tsunamis, collapsing skyscrapers, falling monuments and smothering ash clouds. Mountains melt and whole cities slide into the sea. Emmerich outdid himself—and it works.

As a disaster genre fan, I also loved how Emmerich actually addresses the disaster genre within the film itself. In particular, I appreciated a scene between Curtis and scientist Adrian Helmsley, who has read Curtis’obscure science fiction/disaster novel and asks him if he really believes people would act as selflessly and sacrificially in the face of disaster as the characters in his novel did. Curtis reflects that though the critics thought him naïve, he believed people would. This resonates with me as it’s one of the aspects of disaster films that draws me to the genre. In an article I can no longer find online, Alby James gets at this as he observes that these films are stories of relentless jeopardy that requires average folks to find it within themselves to “triumph over great adversity.” These characters are on the verge of being messianic in nature, James points out:

. . . [T]heir desire to save others is what seems to propel them through all situations. This drive may even cause them to sacrifice themselves at the climax so that the others may survive, as Gene Hackman’s vicar character does in The Poseidon Adventure. They are the kind of characters who make us feel good about mankind and reassure us that despite all the difficulties that we may have to face in the world today, we shall always overcome. Independence Day and Armageddon take this to the limit.

And, says James, these films also make us think about things that matter:

These are films that remind us of the meaning of life, the people we most care about and who makes us really happy. When you stare death in the face like this, you know who really matters to you and what you must do. The best of these films do all this.

And these all provide opportunities to bring God-talk into open spaces—and Emmerich’s 2012 is no exception. As his characters face insurmountable challenges, what matters to them is revealed. Some choose to do what is best for themselves while others choose to do what is in the best interest of others. Some seek power and security while others sacrifice those things in order to save others. Characters and stories like these invite us to consider what matters to us—what would do if we were in the same situation? Is there someone or something we are willing to sacrifice our lives for? Why—or why not? And how does this make us think about Jesus’ words about giving up our lives in order to save them?

Interestingly, in a Christianity Today review Steven Greydanus—who gives the film two stars out of four—observes that Emmerich advocates these themes in his disaster films. In an great comparison of the disaster/apocalyptic films of Emmerich (The Day After Tomorrow, Independence Day) and Michael Bay (Transformers, Armageddon), Greydanus muses:

Emmerich has a dimmer vision of the future than Bay; his movies offer real apocalypses, while even Bay's Armageddon is about an apocalypse averted. But Bay has a dimmer outlook on mankind. Emmerich seasons his schlock with schmaltz, with cornball speeches about decency, loyalty, family and humanity. Bay likes his trash trashy, with generous dollops of gratuitous sleaze and exploitation.

In Bay's movies, women are sex objects—pinups and playmates if not bimbos, strippers and/or prostitutes—while men are cocky, testosterone-charged studs or else wish they were, by gum. Men and women in Emmerich's movies are no less cartoony, but the women are wives, ex-wives and daughters, while the men struggle with doing right by them.

A typical Emmerich hero earnestly worries about things like the appropriateness of burning the works of Nietzsche for heat in a post-apocalyptic world. If a typical Bay hero is earnestly concerned about anything, it's probably Megan Fox's midriff. Emmerich might be more likely to kill off nine-tenths of the world's population, but Bay is less likely to make you feel like it would matter. Not that you're very likely to care, or care a lot, in an Emmerich film. But at least you feel that Emmerich cares—and that he wants us to care—and that's better than nothing.

Heh, I’m much less jaded about Emmerich’s films than Greydanus, but I absolutely love this observation because I think it reflects Emmerich’s desire to, as James puts it, “make us feel good about mankind and reassure us that despite all the difficulties that we may have to face in the world today, we shall always overcome.” And stories like that invite us to not only consider how humanity is definitely broken and flawed, but also how we carry within us the image of the Creator—and stories like this draw our attention to those fractured reflections and, ultimately, to the One in whose image we are created.

Not that I think Emmerich is pointing that way on purpose. In a Sci-Fi Wire story, Emmerich elaborates that his choices about the destruction of certain landmarks has to do with his sentiments “against organized religion.” (Almost more interesting, however, is the attention the article draws to the reasoning behind why certain religious landmarks are left alone.)

But while he might be against organized religion, I’m not sure Emmerich is against the idea of God. In particular, I was struck by a scene where Curtis and his daughter sing a gospel song at the top of their lungs and another where Kate breathes a short but desperate prayer in one of the final scenes. While not significant points in the film, they are little aspects that allow for personal faith.

Either way, this story and its characters—like other good disaster films—invites us to think about issues, themes and ideas that bring God-talk into open spaces. And, as Ebert puts it, 2012 may not be a masterpiece, “But is it about as good as a movie in this genre can be? Yes.” As for this satisfied movie goer, it was one heck of a ride.