Come on 'Over the Hedge' 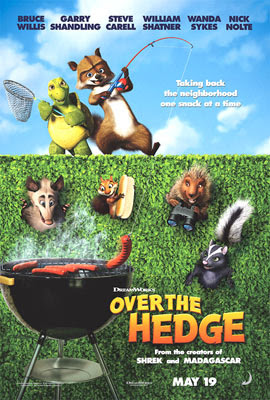 Being that we are a family with two kids (8- and 3-years-old) we don’t get to the theater as often as we’d like due to “monetary constraints” (we either get hit by the cost of four tickets or two tickets and a babysitter). As a result, we see most films when they release on DVD. And many of those are “family films.” Our movie fare this morning is a prime example: this year’s Over the Hedge.

Family consensus? Heh, we liked it.

The plot? According to IMDB: “A scheming raccoon fools a mismatched family of forest creatures into helping him repay a debt of food, by invading the new suburban sprawl that popped up while they were hibernating...and learns a lesson about family himself.” The film is absent bad language, the characters funny and friendly, and there’s not a lot of bathroom humor. Critics, for the most part, also liked the film. A review at Christianity Today by Carolyn Arends concludes: “The film's messages—pro-family (really more 'pro-community'), pro-ecology, and anti-consumerism—sometimes feel a bit forced. But Over the Hedge is genuinely and consistently funny, for both children and parents. And in a world of often-unfunny kid features, that's a triumph.” You can see a list of other reviews from the Christian arena here and links to mainstream reviews at Rotten Tomatoes (where it ran a 74% fresh rating). 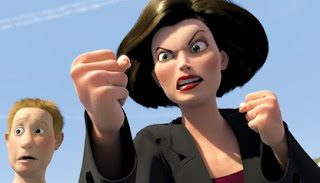 My favorite parts? Oh my goodness, this film is a pop-culture fan’s delight. There is a horrendous amount of allusions and references to films, plays, products, icons (from Street Car Named Desire to Star Trek, from Pringles to SUVs)—too many for me to keep up with. Heh, and fortunately I don’t have to because other people already have: go here for starters. Also, I loved the little things that poke fun at us suburbanites. For example the name of the suburb in the film is "El Rancho Camelot," a mix of allusions that makes fun of our own when-you-think-about-it hilariously named sub-divisions. I also resonated with the Home Owner Association Nazi and the walled-in green spaces as attempts to make us feel “closer to nature.” 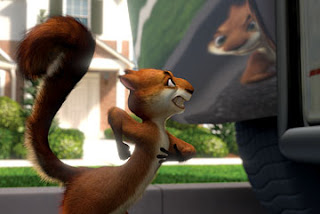 And for all you fellow caffeine-addicts out there, you gotta love the scene of the power-drinking supreme-caffeinated Hammy (voiced by Steve Carrell), which I can readily identify with as I always have a 4-pack of those power drinks sitting in my pantry (heh, I’m drank one this morning because there’s no coffee beans in the house and I felt that caffeine-withdrawl headache encroaching). And, I must admit, I’ve felt close to that “incredible elation” at the height of the caffeine curve myself, heh. (You can watch the scene here at YouTube) 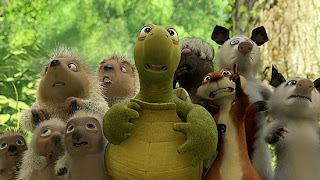 On the God-talking end, I appreciated the scene where the animals, waking from their hibernation, first encounter the hedge. Some of the animals responded to this thing they’ve never encountered and can’t comprehend by naming and deeming it a deity. Albeit very comically in this film, they start interpreting events in terms of what that deity wants and doesn’t want. Throughout recorded history, many religions and false gods developed this way.

But the reason I really appreciated the scene is that it also testifies to our innate recognition that there is something out there to worship. We are geared that way. Call it Pascal’s “God-shaped vacuum” or C.S. Lewis’ thesis that all men act according to some innate Moral Law. It’s in our DNA. And, as followers of Jesus believe, the God that created us this way doesn’t leave us to ourselves to figure out who he is or what he wants. He’s a God of revelation. He reveals his character and his will and the Kingdom in his Word and in Jesus and in his relationship with us. 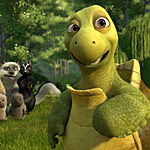 I also appreciated Verne (Garry Shandling), the turtle. Verne, the leader of the forest group, has a developed and strong sense of right and wrong (wrongness being indicated by a tingling in his tail, heh). He has a pretty good sense of what is on the up-and-up and what isn't—and he knows RJ the raccoon (voiced by Bruce Willis) isn't. But this sense of discerning judgment isn't misused. In the same way Verne instinctively knows when something isn't right, he instinctively knows how and when to forgive. When RJ turns himself around and comes to rescue Verne and his friends, Verne doesn't berate or withhold his forgiveness and trust. Just as he’s built up an instinct about when not to trust, he’s built up another one that doesn't hold a grudge. I liked this about Verne. It reminds me of how those who follow Jesus should use the discernment of the Spirit.

But perhaps I’m getting a bit too serious. The film really is enjoyable and fun. All in all, Over the Hedge is a fine and delightful family film.