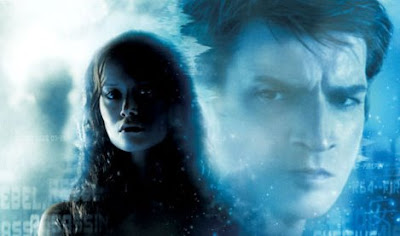 At the end of Serenity, Mal sits beside River as she pilots Serenity off world.

Mal: It ain’t all buttons and charts, little albatross. You know what the first rule of flying is?

River looks over at him.

Mal: Well, I suppose you do, since you already know what I’m about to say.

River: But I like to hear you say it.

Mal: Love. Even with all the math in the ‘verse, if you take a boat in the air that you don’t love, she’ll shake you off as sure as the turning of worlds. Love keeps her in the air when she oughta fall down, tells you she’s hurting before she keens. Makes her a home.

River smiles gently and looks out the windows, covered with rain.

River: The storm’s getting worse.

Mal, along with everyone else on Serenity, has suffered in life. And one of the threads in this film (and the series from which it comes) is Mal’s choice embrace a faith and belief in something once more—and ultimately, that is love.

Earlier in the film, Shepherd Book (one of my favorite characters to ever to grace the small or big screen) urges Mal to “believe in something.” Some critics take that as an example of a philosophy that indicates all beliefs are the same, but Greg Wright of Hollywood Jesus gets at the heart of this in his review: “But make no mistake. Serenity does not suggest that one belief is just as good another. It does, however, make a strong case for believing in something as the first step toward finding truth. And hope will sustain the journey.”

And the Shepherd knows that Mal is on this journey. He isn’t spurting words in a vacuum—he’s talking in the context of his relationship with Mal. He knows Mal. When Mal confesses to him that he had every reason to leave River behind at one point, the Shepherd looks at him and reminds him, “It’s not your way, Mal.” Indeed, it is Mal’s love not only for his friends (heh, and his ship) but even for those he does not know that guides the hard choices and sacrifices he makes (and asks others to make) in the rest of the film. Ultimately, it is love that gets Mal through life itself.

As Wright so aptly observes, “this film is not ultimately about faith. It's about love. . . ‘And now these three remain: faith, hope and love. But the greatest of these is love.’”

And love, ultimately, leads to its Source and Author, who keeps us in the air when we oughta fall.
(Image: from film poster, Universal Pictures) fireflyctgy