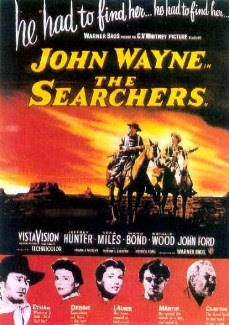 Late last night, after wading through piles of wrapping paper, stacks of dishes and abundant and yummy leftovers from a glorious Christmas, I collapsed exhausted on the couch to search out a good movie (my favorite way to reward myself and relax). AMC was running a cowboy film marathon, and when I saw The Searchers (1956) was one coming up, I debated whether or not to stick around. This film is a mixed bag for me. I’ve been a John Wayne fan since I was a kid (I still remember the day he died and how the soft focus image of him smiling on the screen of our small black and white TV faded to black as a news program announced his death), but The Searchers—while arguably one of his best films—isn’t an easy one for me to watch. But the pull of watching Wayne outweighed my hesitation.

The Searchers—which has been named as one of the best films of all time on several prominent lists—is a Western that follows Ethan Edwards (Wayne), an embittered man who hates almost everyone, but especially the Comanche. When his brother, sister-in-law (with whom he obviously has been in love most of his life) and nephew are killed and his two nieces (one of which is killed shortly afterward) are abducted in a Comanche raid, he goes on a quest to rescue his remaining niece, Debbie (portrayed in brief appearances by Lana and Natalie Wood). As the years go by, however, his quest gradually goes from one of rescuing Debbie to one of killing her (which he sees as an act of mercy based on his belief that “living with the Comanche ain’t living”).


Even though it’s a hard film for me to watch, I’ve found myself drawn to The Searchers over the years. Part of it is the landscape of the film—a grand scale and breathtakingly beautiful place that is so incredibly deadly. Part of it is that Ethan is so wounded and damaged (I think Wayne really shines in this film). And then there’s the depths of pain portrayed in the film. As a mother I want to cry out with Martha when she sends Debbie out the window and into the dark as the Comanche approach. And Wayne’s eyes, face and body language after he discovers Martha and Lucy’s remains off screen say more than if we’d seen the bodies ourselves—modern filmmakers could take a lesson here. And I’m really impressed by how director John Ford works with the way darkness can lurk unrecognized in a society and us as individuals. I also appreciate that Ford addresses the violence, hatred and evil acts (as well as the gentleness and innocence) of folks on both sides in this film, but hearing the kind and spunky Laurie defend Ethan’s quest to kill Debbie is one of the most uncomfortable and disturbing moments in the film for me.

The last scene of The Searchers, however, is my favorite scene in the film. Ethan, who in the climax of the film embraces Debbie instead of killing her, slowly rides back to the settlement with Debbie in his arms. Ford frames the very last scene through a doorway from within a house. We gaze through the door into the brightness of the desert and watch the other characters with the rescued Debbie walk by Ethan into the house and pass out of our view. We are left watching Ethan, who looks after them. Then he turns and walks slowly away towards the desert as the door closes and the film ends.

Personally, this scene is one of my all time favorite moments in film, a rich reward for going through the pain and discomfort of the rest of the story. I find it a moment dripping with redemption, new life and hope. For me, this moment is not one of isolation or separation (two of Ethan’s chosen and constant companions up until now) but one of grace-filled solitude. I’ve always imagined that as Ethan takes that slow saunter toward the desert he is also walking at the edges of a country newly discovered, one with the scents strange to him, one with before-unknown hints of rest and release and peace. The burden of all that bitterness and hate is lifting because Ethan took a step of faith and love when he embraced Debbie instead of giving into his pain, bitterness and prejudices. Making a choice like that changes us. It frees us. That choice ushered Ethan through a doorway of sorts. He’s at the end of one thing and the beginning of another. He isn’t being shut out or separated but liberated to a new world. Ethan is beginning to be free—to mourn, to love, to change, to live. He’s still got a long way to go, but that is how transformation begins. And the joy, as they say, is in the journey—a journey I think Ethan is beginning.

And, in the end, I guess that makes it a perfect film for Christmas night, because redemption, transformation, hope, promise and especially love is a world that is all too often messy, dirty and dark is what Jesus is all about.
(Images: Warner Bros via Wikipedia Commons and IMDB)