Of nannies and outer space

July 22, 2006
Here are two movies for your Netflix queue—both of them kids’ flicks (whose presence on this blog is easily explained by the existence of an eight-year-old and three-year-old in our household): 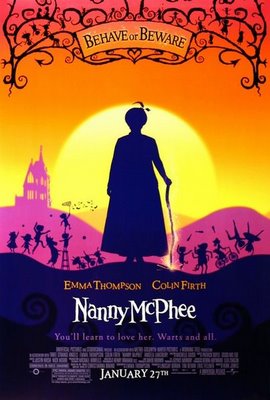 Nanny McPhee. This film was a delight, at least for our family. The plot? A kind of Mary Poppins gone slightly mad—but in a good, wild way. Emma Thompson (who also adapted the film from its novel form) stars as a very ugly and foreboding governess who uses magic to rein in the behavior of seven very naughty children whose mother died several years before and left their father at wits-end after they’ve already gone through 17 nannies. McPhee, a “government nanny,” says she has only five lessons to teach: 1) go to bed when they're told, 2) get up when they are told, 3) get dressed when they are told, 4) listen (which is also aimed at the father), and 5) do as they are told. Other "lessons" are taught along the way, like saying “please” and “thank you” (and really meaning it) and learning to accept the consequences of their actions. As the children learn the truths of these lessons, Nanny loses bit by bit her ugliness and grows more beautiful—and the lives of the children and their family gradually and utterly transforms. [This paragraph edited on 7-23 to correct the list of lessons.]

After all the kindgom-image gathering I’ve been doing, this film was a natural inclusion. McPhee teaches disciplines more than laws—and in the Way of Jesus, disciplines are ways to open ourselves up to God’s grace and his tranforming power rather than a set of laws to live by. And when we put those disciplines into practice with real intention, not only does God use them to transform us (and continually reveal his true true likeness before us), but the community in which we live is transformed as well. In particular, the film's wild ending made me laugh and practically weep at the same time with its freedom and release of life as it was meant to and should be. A happy ending indeed.

In addition, this film’s kitchen scene is one of the very best illustrations of Romans 1 I’ve ever seen. When the children first meet Nanny McPhee, they have bound and gagged the cook and are making a complete disaster of the kitchen. When McPhee’s stick thumps the floor, their misbehavior is suddenly accelearated and beyond their control. They are trapped in their wrong deeds, which cease to become fun and soon border on danger and harm to themselves and others. While slightly dark, it rings oh-so-very true about the very nature of sin.

For Christian reviews, see Christianity Today and Hollywood Jesus reviews here and here. For reviews from the secular media, see the collection at Rotten Tomatoes (where it's running a 75% fresh rating). 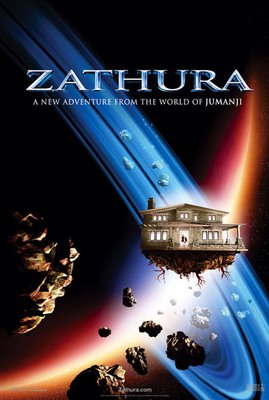 Zathura. That this film was so enjoyable and engaging was both a surprise and a delight. What’s it about? IMDB says, “Danny and Walter are two brothers who barely get along even while driving their parents [who are divorced] to distraction as their older sister tries to ignore them. Despite their squabbling, the brothers manage cooperate enough to play an old mechanical board game named Zathura. However, after their first move, they find that the game has apparently flung them, their sister and their entire house into outer space. Furthermore, the brothers surmise the only way to return home is to finish the game. However with almost every move, new dangers arise as the siblings find themselves learning to cooperate in ways they never expected as they realize what they mean to each other.” It has hints (for me, at least) of Goonies and all those other adventure films I watched as a kid. It’s got great writing, great characters and great fun. And the best line of the film is also one of life’s greatest truths: “There are some games you can’t play alone.” Aye. Ain’t that the truth. The quicker we learn that lesson the better for us—and this living-together we call the church.

For Christian reviews hit Christianity Today or Hollywood Jesus. For mainstream secular reviews, see the collection at Rotten Tomatoes (where it's running a 76% fresh rating).