Talking God with 'Arthur and the Invisibles' 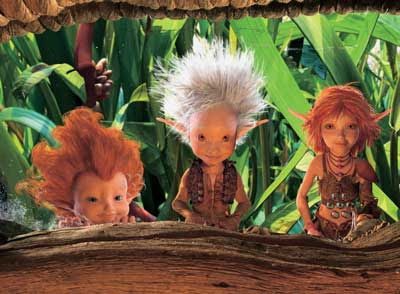 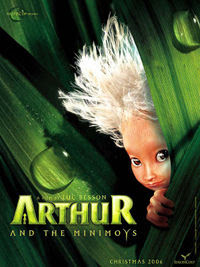 Last night I watched Arthur and the Invisibles with my kids, and I was pleasantly surprised. Critics panned it, but my kids liked it—and I thought it had some interesting aspects that bring God-talk into open spaces.

The film is about 10-year-old Arthur who (in order to help his grandmother keep her house and property from being bought out by a greedy building developer) goes on a quest to find the rubies buried in his grandmother’s yard by his adventurer/explorer/inventor grandfather who disappeared some years back. He seeks out the help of the Minimoys—a clan of tiny, fairy-like creatures whom he discovers now live underground in his grandmother’s yard after his grandfather brought them back from Africa (along, it seems, with a tall African tribe which lived in and found their community with the tiny creatures). Through a special telescope (and with the help of the Africans), he shrinks in size and enters the world of the Minimoys who—in particular, the young princess Selenia and her brother Betameche—join him on his quest, which is greatly complicated by the machinations and plots of the evil Malthazard. 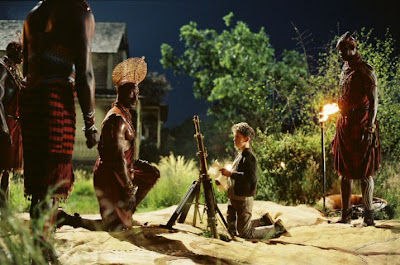 While I get why critics didn’t like the film (both in the mainstream and Christian media), I must admit that I found the story entertaining—and I was particularly intrigued with the God-talk language speckled throughout the film. Words like “faith” and “miracle” pop up more than once.

One scene in particular really resonated with me. Arthur, his recently captive-but-now-free grandfather, the princess, and her brother are trying to escape the evil Malthazard, who is releasing a torrent of water down a tunnel to destroy them. Arthur’s grandfather stops from exhaustion and tells them that the only way they’ll escape the certain death that is coming for them is to “pray for a miracle.”

Arthur stands in the middle of the tunnel in frustration. Then he looks at his hands and sees sunlight on them, coming from a grate above. That’s significant, because it is the same grate in the dirt driveway through which the building developer had earlier very spitefully kicked a wind-up toy car Arthur’s grandmother had sacrificially bought him for his birthday. Sure enough, Arthur looks around and the toy car is lying on its side against the tunnel wall. They right it, wind the crank, climb in and start their escape from the coming deluge.

I find this scene significant for several reasons. First, I think it illustrates how we use the term “miracle.” While it might differ from the actual definition of the term, we often use it when we see no way a situation can change except for divine intervention.

Often, however, divine intervention has already been at hand even before we cry out for it. We see this in Scripture, like the time Abraham’s most trusted servant is praying at a well for help to find a wife for Isaac. He even gives God a scenario by which he’ll recognize the woman the Lord has in mind for Isaac. But even as he’s praying, Rebekah has already shown up to get water. Events begin to unfold just as the servant imagined. He’s overwhelmed the event (Genesis 24). It’s an action like this—of a God already (and always) working and living with us—that results in an event that we term a miracle: divine intervention in time and space.

This scene in Arthur and the Invisibles illustrates that concept very well. What was a mean, spontaneous action by the building developer (kicking the toy car through the grate in the driveway) ended up saving the lives of Arthur and his friends. And God works like that all time, taking what’s intended for evil and working it for good. If we see the whole story—as we do in the Bible or Arthur and the Invisibles—we get that. But from Arthur’s perspective (and often our own), it seems to come out of the blue in a striking act of God. It is an act of God—but one of a God who has been working and present all along.

The film has numerous other scenes I could mention that touch on themes like the power and need for communities; the value, love and power of family; how the decisions we make can enable us to be a part of the larger, grander story; and the caution that technology isn’t inherently good so we should cautious in using it.

So, while it might not be the most critically acclaimed film out there, I enjoyed both the story and the God-talk it brings into open spaces. If you have kids (or even if you don’t), it might be worth a few bucks and an hour or two.

(For reviews from the mainstream critics, go here. For reviews in the Christian media, start here and here.)