"Listen to me. No matter what happens, whether it’s here or anywhere, I’ll take care of it. You—you will not be alone."

--Alexandria to Nim, after Nim expresses her fear that her father has died and isn’t coming back to the island 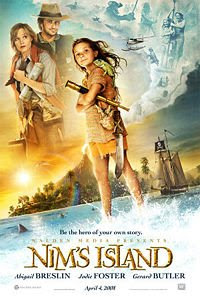 I saw first saw Nim’s Island this summer on a plane from Baltimore to L.A. (a five hour flight) sandwiched between my two kids, watching it on small drop down screens smaller than my laptop's with really bad audio headphones—and still, the above scene reduced me to tears. I’ve since seen the film again in my own living room, and while the film itself isn’t anything to write home about (though, imho, it isn’t something to pass by either), I was moved by the scene the second time as well. For me, as a follower of Jesus, this scene not only echoes God’s truth to us, but also the power these kinds of words have when we say them to each other.

As I watched this scene, I was struck by the idea that love is such a divine thing. John tells us that we love because we are first loved. Love originates with God. God is love. Love drips with his desperate longing to set it all right, to redeem, restore, protect, cherish and celebrate us—he’ll “take care of it” and we are not alone. Love is his breath, his truth. When we love, how can God not be there? It is his to begin with. It is as we breathe his image, as if we move and embrace with his arms and touch. And when I witness moments like Nim and Alexandria’s, where truth is spoken so clearly, it squeezes my lungs tight.

I’ve long realized that Christians don’t hold the corner on love. Whether we walk with Jesus intentionally or not, we all know how to love. Part of being human means each and every one of us knows how to love—deep and desperately. As a follower of Jesus, I can only exclaim, how can we not? If we are created in his image—an image John describes as Love itself—how can we not know how to love? And moments like the one in Nim’s Island bear that out.

In Soul Graffiti: Making a Life in the Way of Jesus, Mark Scandrette relays a conversation he took part in, where he suggests that “we were made to love God and love one another in a state of shalom-peace.” He continues:

Many people believe that the crucifixion and resurrection of Jesus fulfilled a cosmic mystery. C. S. Lewis I believe called it ‘the deeper magic of the universe’ that give us the power to need to seek God’s shalom. People came to believe that through the sacrifice of Jesus, an energy was released, some would call the Spirit, that allows us to love God and people from the deepest place of our being. When Jesus traveled, proclaiming, ‘The kingdom of God is near,’ he was announcing that a new kind of life is now possible, or as a friend likes to say, ‘There’s a new way to be human.’

The longer I walk the Way, the more I believe that learning to live in this “new way to be human” is at its core all about love. Being loved and loving with a love like Alexandria’s for Nim—love that conquerors fear, longs for right-ness, and sets out to right the world. A love like Jesus’, whose life, execution and resurrection explodes outward even now, swallowing death and darkness in an eternal blast of love and life.

This scene echoes all that for me. It makes me think that perhaps when we love, we are not simply echoing God’s love for us or others but actually being the flesh and blood of Love itself. And, at least for me, that’s a breathtaking notion.