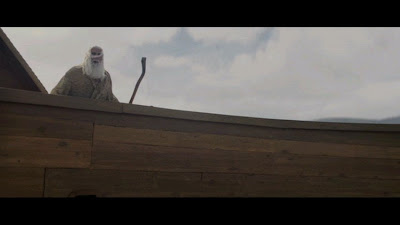 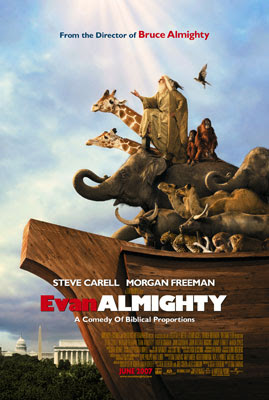 While I knew this film didn’t get much by the way of critical acclaimation, I was looking forward to seeing it. So, when it finally reached the top of our NetFlix queue, my husband and I pulled the kids onto the couch one night and I crossed my fingers in hopes that I wouldn’t be disappointed—and I wasn’t.

Evan Almighty, a sequal to Bruce Almighty, follows Evan Baxter (the anchor from the first film played by the ever-impressive Steve Carell) who’s just been elected a congressman and moves his family to the Washington, D.C. area. In the opening scenes as the credits are still scrawling across the screen, he crawls out of bed and kneels on the floor to ask God for help to “change the world” (also his campaign slogan). God (played again by Morgan Freeman) answers his prayer—but not in the way he expects, heh.

This film’s a lot gentler and less bawdy (and admitedly less poignant) than Bruce Almighty, but like the first film it is spattered with elements of truth, some of which weave into larger ones throughout the film: 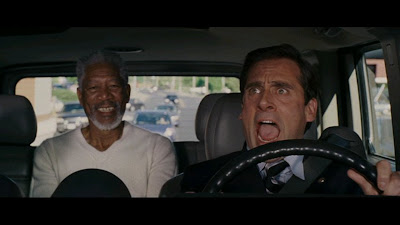 Fear gives way to love. I loved the moment when God appears in the backseat of Evan’s Hummer and Evan screams. “Let it out, son. It’s the beginning of wisdom,” God says, an humorous reference to the biblical truth that the fear of the Lord is beginning of wisdom (ie, Psalm 111:10; Proverbs 1:7; Proverbs 9:10). But God doesn’t want Evan (or us) to stay there, because (as it’s been touched on before on this blog) fear may be a beginning but love is the end. Indeed, the truth of it all is that the entire Story (and our parts we play) is a Love Story. “Whatever I do,” God tells Evan at one point, “I do because I love you.” (I absolutely loved how the story of the Noah’s Ark is described in this film—but I’ll save that for a Favorite Movie Moment.) 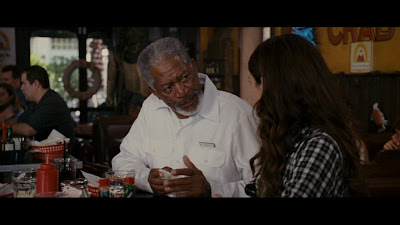 How we grow. I also appreciated the articulation and portrayal of how we are transformed and grow as we walk with God. At the beginning of the film, Evan prays for help in changing the world and his wife Joan prays that their family will grow closer. Neither get what they bargain for, however. At one point, Freeman’s God challenges Joan to think about how prayers like this are answered:

God designed and longs for us to become the type of people Jesus and the New Testament writers describe, but that process is not instantaneous but rather a lifelong journey and we are invited to cooperate with God in learning how to become the kind of person who is patient, courageous, and loving. And the bottom line in that process is learning to trust God, which is exactly what Evan and Joan must learn to do more of in this film. Out of that trust comes the type of person who does those things.

Small things matter as much or even more than the big. I spent a great deal of time in Genesis this fall for a freelance writing assignment, and one thing I floored me: as much as God was working on the larger Story, he paid astoundingly deep and intimate attention to the people in that Story. This is a truth reflected in this film, too. Even as Evan is building the Ark, God instructs him on how important it is to pay attention to and respond to needs around him. This is how it goes in the work of God, to restore this broken world and we broken people with his Life, Love and Right-ness. 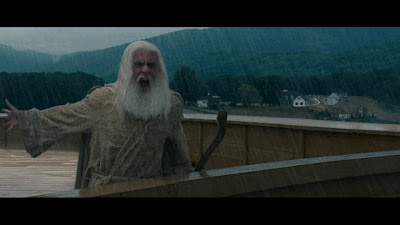 We’re invited to join in God’s work. Another aspect of this film I enjoyed was the exploration of how God invites us into his work to save and restore and bring this world and its people back to him. Evan, Joan and their kids are all invited to join God in his work. And that extends outward from Evan: As he calls people to the completed Ark, he’s doing so because he doesn’t want them to perish in the flood (a result of other men’s selfishness and corrupt decisions); this is but an echo of God’s longing, ache and love; he doesn’t want us to perish in a broken world, a world broken by our bend towards selfishness and skewed desires. He wants us to live—and he wants us to live abundantly. And he invites us to work with him to bring that Life and Love to the world. 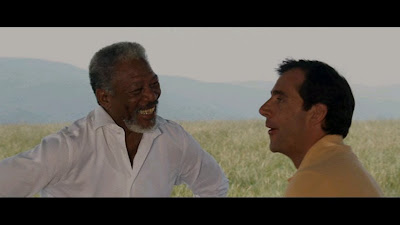 God really loves being with us. The last scene, void of words, is one that speaks volumes above any dialogue that could be written: God dances with Evan underneath a tree (my daughter, who knows an astounding amount about trees, instructed me that it is an olive tree) in the middle of the wilderness. It’s an absolutely gorgeous moment, an echo of the desire of God to be with us in love and joy. Beautiful.

On a last note, I found the film also reflects (albeit in a simplistic and humorous way) the cutthroat world many of us work in, especially in the power centers in the world (like the D.C. area). Evan quickly discovers this in his interactions with another congressman (played by John Goodman). The halls of power are cutthroat and perilous. Recently, I was reflecting on why Pilate said what he did about truth when Jesus was before him, and I finally got it: Pilate lived in a world where the most powerful got to determine what truth is. You lived their truth or you perished. That’s a hard world to live in—one far too many of us find ourselves a part of. Sometimes these power structures and centers recognize the integrity and virtues of those who walk with God or walk in the ways of God—but sometimes it cuts them down (think Joseph, David and the early Christian apostles). The bottom line is that we have a choice on who to trust and whose rules we’ll walk by: the world and it’s ways or God and his Royal Rule: “Love your neighbor as yourself” (James 2:8).

Christianity Today’s reviewer gave this film 3.5 out of 4 stars, but mainstream critics decidedly panned the film, calling it “far less interesting than it’s premise,” “shamelessly juvenile, pseudo-religious, mock-sincere,” and a film that “combines the easiest elements of lazy comedy with the most indulgent elements of lazy disaster movies.” I think those judgments are too harsh; the film’s definitely not a masterpiece, it has its sloppy moments and the “flood scenes” are rather farfetched, but I was engaged the entire way through. I found it a gentle, funny and worth watching story. But perhaps this is a case where my own familiarity with the biblical story informed my watching of this one.

At any rate, my husband and I really enjoyed Evan Almighty—and so did my kids (and there are far too few films with which we can do that together). Plus it brought more than enough God-talk into open spaces.
(Images: screen captures copyrighted by Universal Studios)