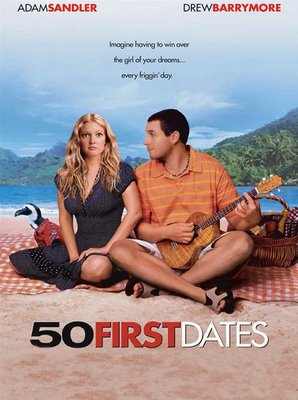 The other night, after a particularly long day (which seems to be the norm these last few weeks), I fired up the Internet on my computer, turned on the TV and clicked through web sites as I flipped through channels (one of my favorite pastimes that drives my husband crazy). This time, however, I ended up shutting off the computer because I ran across one of my favorite films: 50 First Dates, a rather unconventional and surprisingly touching romantic comedy starring Adam Sandler and Drew Barrymore:

Henry (Sandler) lives an enviable life in a Hawaiian paradise, spending every night with a beautiful tourist in search of an island fling. It's a sweet life with no strings attached...until he meets Lucy (Barrymore). He and Lucy hit it off from the get-go, but the next day she acts like she doesn't know him. Has his karma come around to kick him in the butt or what? Actually, Lucy has short-term memory loss so every night all memory of her day is erased. But a man in love will go to any lengths to win over the girl of his dreams, and if that means having to find imaginative ways of doing it over again every day, then Henry's up for the challenge.

Sometime last year, this one showed up in our mailbox in that familiar red NetFlix envelope. Like too many other films, I couldn’t remember how it got on our list. I’m not a big fan of Adam Sandler films—most of them have too much frat-style, bawdy humor for my taste. But I have enjoyed a good segment of Drew Barrymore films.

Anyway, while this film has some of that rather what-I-find-tasteless humor running throughout the film, I am always surprised to find how deeply this story moves me—to tears every time, to be exact. Why? As best I can articulate it, the bottom line is that it shows the deep and transforming power of love, and that always echoes of God-talk.

After watching it this time, I’m particularly struck by how the transformation that takes place in Henry illustrates the biblical truth that in giving up our life we actually gain one beyond our wildest imaginations. Henry gradually finds he’s giving up a life he thinks he wants—one of no strings attached and centered on himself—for one that’s more wonderous than he imagined could exist. It’s not pain or problem free; in fact, it has those in buckets. But it’s a life he chooses in spite of all that. And he chooses it because it makes his life fuller, richer, open and joyful.

And this makes me think about Jesus’ words differently. For some reason, we’ve attached a sense of duty to his command to deny ourselves, to lose our lives in order to gain them (Mark 8:34-35). But what if it wasn’t about duty and it was more like Henry’s experience? Rather than changing his life out of duty, Henry changes one life for another because he’s in love. He does it because Lucy makes him feel more alive, makes him feel loved, makes him feel full and spilling over. The costs of that life are but drops in an ocean that is spilling over with love. What if, as followers of Jesus, we gave up our lives not out of a sense of duty but because we were in love with Jesus—because our relationship with him makes us feel more alive, more full, more joyful than any other Person or way of life we can imagine? And how would a life like that spill over to others we encounter? How would that change the way we encounter and see and treat others?

A practical word to the wise: religious film critics disagree on the film’s worth. Some can’t get past the bawdy humor and secular approach to male-female relationships—and with good reason: the film deserves it’s PG-13 rating. For some, the frat-boy humor drowns any worthy themes or ideas. Indeed, Sandler films often remind me of the more bawdy tales in Chaucer’s Canterbury Tales, with which my memory is vividly stuck after spending a year pouring over them for my graduate school thesis (and that was almost 20 years ago). But this film is lighter on that content than most other Sandler films. And if you don’t mind that kind of humor showing up now and then, the story—especially the incredibly beautiful and moving ending which always makes me swallow a sob—is worth it.