Go ahead and “Catch and Release” 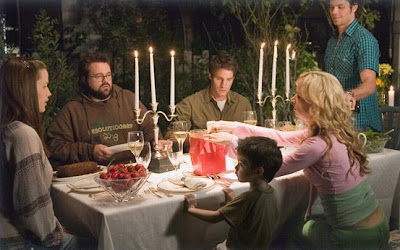 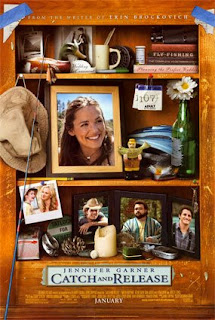 Recently, my husband went on a short business trip, which left me with control of our cable’s On Demand movie list. So one night after I put the kids to bed, I curled up on the couch and ordered Catch and Release, a drama-with-humor starring Jennifer Garner as Gray Wheeler, whom we meet at the funeral of her fiancé Grady on the day they were to be married. As secrets about Grady (and each other) come to light, Gray and Grady’s friends work to rebuild their lives.

The film was critically panned (a cringing 22% at Rotten Tomatoes though a thumbs up from Richard Roeper), but quite honestly, I liked it. I thought it a great chick flick. (Heh, Wikipedia reports that stats from its opening three days indicate 75% of the audience were women—most over 25—so I fit right in there.) In spite of its flaws (and its got them), it’s a charming tale that made me laugh and cry and left me wistful and smiling—kind of like the people in it: a flawed group who face painful truths and choose to overcome instead of succumb. And that leaves them with smiles, though some are more wistful than others.

And it also has some solid echoes of truth. In particular, it illustrates all-too-well that hiding things (from the minor, embarrassing and sometimes endearing flaws we bear to the much bigger, more painful ones) pulls you apart and separates you from others. Yet it also underscores that confession (from those little things to the big) actually brings a releasing freedom and paves the road (albeit a sometimes agonizing one) for deeper love and forgiveness and a bringing-together. Interestingly, a scene that deals with confession takes place around a table, eating dinner. I couldn’t help but think of the “love feast”—and the times I’ve sat around dinner tables, breaking bread with other followers of Jesus, coming as we are, confessing our flaws and struggles while celebrating and encouraging God’s presence in our lives. That’s communion, folks.

So, yeah, it’s not the best-made film out there, but, at least for that night curled up on the couch, it was perfect for me.


See Christianity Today’s review here and a collection of mainstream reviews here. Also, here’s Christianity Today’s blurb on the film’s rating: “Catch and Release is rated PG-13 for sexual content, language and some drug use. Sex is implied in several scenes and somewhat explicit in two. A character puts an unlit joint in his mouth in one scene, another character overdoses on prescription medication, and there is repeated abuse of alcohol. The movie is definitely unsuitable for children and caution is recommended with teens.”