‘One Night’ made for a good afternoon 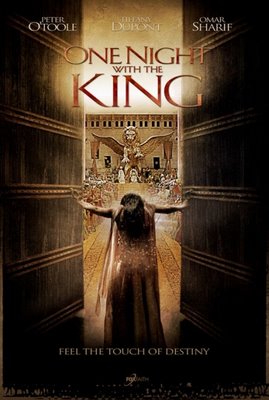 At our favorite theater’s last afternoon matinee, my husband and I saw One Night with the King, and while I’ve seen better films, I must say I’ve definitely seen worse.

The film follows in epic tradition of grand sets, death-dealing political intrigue and love fallen-into, thwarted and renewed. Tiffany Dupont (Esther) is delightfully fun to watch. Personally, I think she carries the film, which is appropriate since she’s got the main role. And I must admit, I really enjoyed the addition of a love story between Esther and Xerxes (though it takes a leap of faith to believe Xerxes would be so enthralled after one meeting, but, nonetheless, the “chick” in me swooned, heh.) The sets were majestic and regal and the cinematography was breathtaking at times (though clumsy at others). I also liked the exploration of why Haman had such a hatred of the Jews (his linage as an Agagite, a people slaughtered by King Saul 500 years before).

The film’s weaknesses have been well discussed by other reviewers. The script isn’t as polished as it should have been (though I don’t mind flowery speeches and the shifting accents as much as other reviewers did). The politics—and thus the plotline—got somewhat convoluted and confusing. The flow was disjointed at times, which jolted me in and out of the story. And who advised James Callis (Haman) to use a growl in his voice? Ack. For goodness sake, Callis has got what it takes to play vindictive and power-hungry (his Battlestar Galactica Baltar is enough evidence for that), so just let him do it. And it was a bit forced to hear discussions about “democracy” and “every man is created equal” among camels, elephants, and harems.

Overall, however, I think the movie is a good attempt to tell a good story—one that illustrates (despite what some reviewers think) God’s ever-working-towards-good in our world along with his willingness to leave it up to us as to whether or not we participate in that work. I’ve always loved the story of Esther with all its grandeur and epic-ness, and I’ve long been enthralled with the idea that each of us come to a point (or, perhaps, many of them) where we find ourselves in a place “for such a time as this.” And One Night doesn’t fail to get any of that across.

I’ll put my vote with the Christianity Today’s review (which gave One Night 2.5 out of 4 stars); it’s an average flick with some things really going for it and some things not. But it’s worth a matinee viewing—or a place on your NetFlix queue.