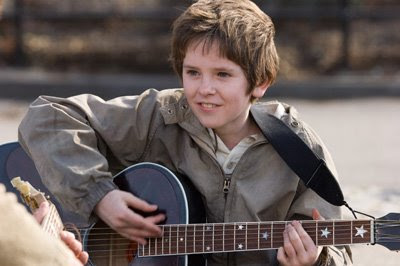 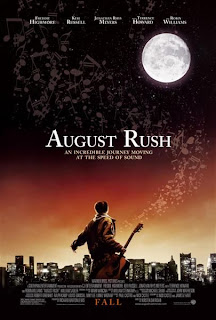 To borrow a line from another film, August Rush had me at his very first word. While critics basically panned it, I found the unabashedly sentimental film moving and gently magical. It has its flaws (Peter Chattaway gets at those in his review at Christianity Today), but in the end August’s story got me because it reminded me of what’s true.

The film centers on 11-year-old Evan (Freddie Highmore), a musical prodigy who is orphaned at birth and uses his gift in music to seek out his parents. He’s the child of a chance one-night encounter in New York between Irish rock singer and guitarist Louis (John Meyers Rhys) and cellist Lyla (Keri Russell). But circumstances break them apart before Lyla finds out she’s pregnant—and then her father tells her she’s lost her baby in an accident (though he’s really given the boy up for adoption as he fears it will interfere with Lyla’s career). Eleven years later, Lyla has given up playing and Louis has walked away from his band. Both are longing for something more, something they’ve lost, something they know is out there, waiting. In spite of growing up in the harsh surroundings of a boys’ home, Evan’s grown up with the faith that he’s always been wanted by his parents, he just needs to help them find him. So, he decides to “follow the music” and runs away to New York City where he encounters a street musician called Wizard (who gives him the name August Rush and played by Robin Williams), a little girl named Hope, an inner city pastor and others who all play parts in this modern fairy-tale-like story. 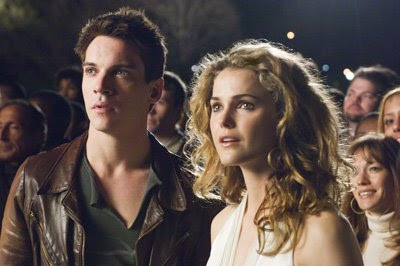 I like this story because it reminds me that God is indeed all around us. That he is always, always calling and working and loving and paying attention, even (or especially) in the pain and wrong-ness and injustice. That he wants his creation whole—that he wants us whole. That he wants relationships restored and gifts expressed. That if we just slow down and listen and pay attention, we can hear and see him in the world and gifts and lives of those around us. And this story reminds me that he works powerfully in the hearts of those who listen.

This story also reminds me that some people can’t hear him, and some of those try to stop others from hearing him, too. Others do listen, but get it wrong. They try to use the Truth they hear for their own ends or out of fear use it for control; when they do that, they are ultimately left with less than what they started.

But this story also reminds me that some people listen and hear him and get it right. When they live in that Truth, they long for a whole world, too. And they start to slow down, listen even more, pay attention and be present. They start to work with him in the pain and wrong-ness and injustice. They start to really love. And lives like that waken the hearts of others so that they learn how to listen, too. (I was particularly delighted to discover that this film shows the church (ie, we people of God)—from a little girl to her pastor—as those who listen, embrace gifts, trust, reach out and make things right.)

Throughout the film, several individuals look heavenward at key moments of longing, need and clarity—and this film as a whole points the same direction. And ultimately, that’s why this film is more than welcome in these open spaces.