Logan and Jessica have been outside the domed city, the only place they’ve ever known, and discovered everything the city’s computer (which runs the city) has told them is a lie—including that they must die at 30. After finding their way back into the city, they run to the terrace above the entrance into Carrousel, where the city’s inhabitants go when they reach 30 years of age for Renewal, an event in which they believe they will be reborn as infants where, in reality, they are actually killed.

The crowds turn around to look up at Logan and Jessica.

Logan runs down the steps to get closer to the crowd.

He jumps on top of a planter and holds up his hand, his crystal clear.

The crowd starts laughing and turns around to enter Carousel as the computer drones on. Logan, desperate to reach the people, turns around to Jessica and stares at her, frantic. Jessica looks out at the crowd—

She runs down to stand beside Logan.

Jessica: Listen to him—he’s telling the truth! We’ve been outside. There’s another world outside.

Sandmen suddenly grab them behind. Logan struggles and continues to yell out to the crowd—

Logan: Life clocks are a lie! Carousel is a lie! There is no Renewal! Nobody’s going to be Renewed! Believe me! Please listen! 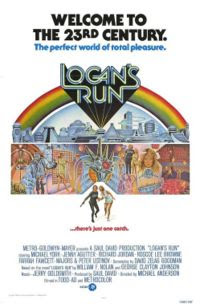 Logan’s Run is among the first science fiction films I remember watching (though I probably saw a quite sanitized television version). The film’s become one of my favorites, and three decades later, I still find its themes compelling. In particular, I deeply resonate with its exploration of the value of knowing our story, what happens when we forget it, and the tumult of being confronted with the reality of it.

Logan’s people live in a gigantic domed city bubbled off from the world—in fact, they don’t even know there is a vast land teeming with life outside. As a people, they have an extremely limited and very dangerous understanding of who they are and the world in which they live. On the surface, it appears they have lives filled with pleasure with every need provided for. But when each person reaches 30, they report to the Carrousel, where they are told they have a chance of Renewal (or rebirth)—but actually they are killed as a method of population control.

I find this a powerful image that gets at what happens when we forget or lose the perspective of the larger context, history or story in which we live. We forget who we are and fail to comprehend or value the vastness of the world in which we live, and as a result, we tend to bubble ourselves in false realities the way Logan’s people bubbled themselves inside the city.

The film also gets at the tumult that results when circumstances either invite or force us to confront that the reality we’ve been living in is false. When we are faced with such a moment, we usually have a choice: either accept and adapt to that new reality or ignore it. Logan resists but eventually accepts that he’s been living under a limited, mistaken and dangerous understanding of the world whereas his friend and fellow Sandman, Francis, fights the evidence to his very death.

And in the above scene, Logan’s Run also gets at the desperate and compassionate desire to rescue or free those still trapped in those bubbles of destructive false realities—not only to save them from the destructiveness of the false reality but also save them to a new life, a real life. As I watched Logan and Jessica in the scene above, I couldn’t help but think of the ancient prophets in Scripture who tried to get God’s people to turn from the false bubbled reality they’d constructed, to save them from the consequences of its inevitable destruction, to help them remember the Story in which they live and turn back to the God and real life. I thought of Peter passionately addressing the crowds at Pentecost, and the intensity with which Paul must have discoursed with those gathered at Mars Hill—a group who dismissed him in much the same offhanded way as those walking into the Carousel dismissed Logan and Jessica. These folks risked everything to free others.

And that makes me think about my own life. In Cultivating a Life for God, Neil Cole calls us to “regain the compassion that Jesus felt in His gut when he took the time to see the multitude.” On more than one occasion Jesus wept, so great was his compassion and desire to free people from a condition marred and bent by death, darkness, injustice, brokenness and wrongdoing. He sacrificed everything to open the door to God’s kingdom once more so all of creation can live—to free us not only from darkness and death but also to a way of living and being full of life, love and grace for which we all were created. Today, Jesus calls us not only to live and breathe in the wide open spaces of God’s kingdom but to ache with a longing for others to know those wide open spaces as well. And like Logan and Jessica, how could we not be filled with that kind of compassion and the desire to free others to real and abundant life once we have roamed the wild, open, spacious, life-and-love filled spaces of God?

In the end, I suppose Logan and Jessica’s journey reminds me how important it is to remember our own Story. In Jesus, God’s Love explodes in an ongoing restoration and redemption for a marred and broken creation. With him, comes an open door with God’s hand to lead us out of the doomed and bubbled realities we’ve built for ourselves and into the wide open spaces teeming with his grace, glory and love. In that Story, we discover who each and every one of us was created and are now once again called and enabled to be: children of God who walk and breathe together in those wide open spaces.

And Logan and Jessica’s journey gives me pause to consider where I am living small in bubbled and false realities. It reminds me to step out and live large in the wild kingdom Jesus opens to us. And it also reminds me to look beyond myself, to raise my eyes with compassion to those around me, to pay attention and to live as I was created: in a risk-all love for God and others.


Note: This film has adult themes and content with brief scenes of nudity.