Film Snapshot: The focus of wrath 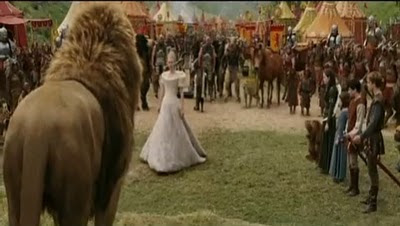 The White Witch has come to reclaim Edmund, who was recently rescued from the Witch with whom he had been colluding and to whom he was then enslaved. She references the Deep Magic of Narnia which gives her the right to reclaim Edmund:

Aslan (with a growl): Do not cite the Deep Magic to me, witch. I was there when it was written.

White Witch: Then you’ll remember well that every traitor belongs to me. His blood is my property.

Recently, my family watched again the recent film adaptation of the classic Chronicles of Narnia: The Lion, the Witch, and the Wardrobe and I was struck anew by this scene because it gets at something about God’s atoning work in history and in Jesus that gets obscured by the way God and Jesus can be sometimes presented. There’s a segment of us who grew up with the impression of an angry God full of wrath aimed directly at us and that Jesus’ life and death and resurrection was about appeasing that anger so he could love us once more. God is angry, but he’s not angry at us—he’s angry at the thing destroying us.

According to the Story we find in Scripture, in the beginning we were created good along with the rest of creation, walking freely in those wide open spaces of God’s grace, glory and love. Then sin and darkness scuttled in, hungrily devouring like a cancer. We became shadows of our original creation, broken and bent, with echoes of his goodness and image yet bent towards sinfulness. We still had the pull of our original creation in his image but, as if infected by a kind of malware, we could no longer operate as we were meant to. Instead, something in us works to make us do what we don’t want to—something that malevolently works towards death and destruction.

But even in that moment, God began working a plan to save us from death and darkness—and the one that wielded that power over us. In a letter to the Hebrews, the writer reminds us why God came to us as Jesus: to get rid us of the thing that was destroying us. He came to rescue us: to “destroy the one who has the power of death, that is the devil, and free those who all their lives were held in slavery by the fear of death.” Or as Eugene Peterson puts it in The Message, “he destroyed the Devil’s hold on death and freed all who cower through life, scared to death of death.”

Years ago, I ran across a story Wayne Jacobsen tells in He Loves Me to illustrate this. While he and his wife were on vacation, their two-year-old son disturbed a nest of bees and began screaming in pain:

Before I could extricate myself from the reclining chair, Sara had already rushed to the sounds of his screams. Even though she is allergic to bee stings and got stung for her efforts, she angrily swatted at the bees as she scooped up her son to run with him to safety. When I got to them she was stroking his head with comfort while still panting form the overload of adrenaline still coursing through her veins. Soon she reacted to the venom and we took her to the hospital for treatment.

If you want a picture of God’s wrath, I can think of none better. She was as angry as I’ve ever seen her, but the anger wasn’t directed at Andy nor did it seek retribution. She simply risked herself to rescue someone she loved so deeply.

That’s what God’s wrath is like. He sees the evil that mars his creation and destroys people he loves and he must be rid of it. His wrath consumes evil and wickedness and as such does not exist as the opposite of his love, but as an expression of that love. It must protect and set free the object of his affection.

I’m sure when my son first saw his mom running at him eyes blazing with anger, he thought he was in trouble. Even though he didn’t know what he’d done wrong, he was already recoiling from her as she approached. Only after she had swept him to safety did he realize he was not in trouble.

I think our shame-consciousness toward God does the same thing. Whenever we see God acting to consume sin, we internalize the anger against ourselves. But that isn’t where the wrath is primarily directed. “The wrath of God is being revealed from heaven against all the godlessness and wickedness of men . . .” (Rom. 1:18).

It’s not people that God seeks to destroy but the sin that destroys his people. . . .

And that reminds me again that this Story of ours is a love story. It is the story of how God works intimately and relentlessly beside and within we broken creations to free, forgive, heal, transform and restore us to be and live as we were meant to—and like Aslan, he invites us to work with him in weaving and restoring that Life in all his creation.