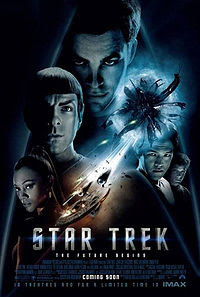 When I was a little girl, I had a best friend who was as captivated by the original Star Trek series as I was. After school, we’d play out episodes (the Trouble with Tribbles being my favorite), pretending to be everyone from Uhura to Kirk, McCoy and Spock. I went to my first (and, so far, only) Star Trek convention in seventh grade, and I still own the Enterprise Class C blueprints I bought there. As to the films, I’ve seen every one of them in the theater and tend to fall in line with most folks with the even numbered films being my favorite. When I found out J.J. Abrams (whose work has a common theme of exploring those larger forces at work in the world around us and with whose Lost I am completely enamored) was going to helm the next installment in the franchise, I was pretty dang sure I would love that film—and I did.

I found Abrams’ Star Trek—which features all new (and young) actors in the roles of that legendary original Enterprise crew as well as taking us back to the early years to watch those individual Star Fleet officers become the crew that we all know they were destined to be—is a successful reboot of the franchise in more ways than one. I love the way Abrams allows us to see the roots of who we know these folks will be while nuancing them in ways we don’t expect. We watch how tragically James Tiberus gets his name and gain meaningful insights from significant glimpses into the challenging childhoods of Spock and Kirk. We find out McCoy’s nickname comes from a place we don’t expect and Urhura—well, I for one, hope they continue that particular relationship. The action is exhilarating without being gratituous in its violence and the special effects are simply amazing. There’s enough to firmly root the film in the franchise’s mythology with a freshness in character and approach that breathes new life into the ST universe.

Not that the film isn’t without its flaws. I thought Karl Urban’s rendition of McCoy was a bit overdone at times, and I thought Scotty’s companion was distracting (I kept wondering why it was there). SciFi Wire put together a list of things that made them arch an eyebrow, and a few of them are on target. (Though the whole series of scenes with McCoy following Kirk around with an arsenal of hypo sprays actually worked well for me, quite funny as well as increasing the tension of the scenes—a hard combination to pull off. And I can also buy that Nero would be blinded to the option of preventing the destruction of Romulus as the myopic nature of hatred and revenge has that effect.) And, of course, there are all those continuity issues whenever a reboot is undertaken or time travel device is used in a story. (But it's not like Star Trek hasn’t fallen prey to that particular problem before, heh.)

But one thing that bothered a lot of folks didn’t bother me at all. A lot of folks seemed irritated by high number of apparent coincidences that occur during the film, but I actually found it a strength in the film.

Early on, I thought the film fell in line with the only theory of time travel that I really have any comfort with—one I’ve heard best articulated in Déjà Vu, where a scientist uses the image of river to describe time: “The traditional view of time is linear, like a river, flowing from the past towards the future.” When another character asks if you change the course of the river, she replies: “Introduce a significant enough event at any point in this river and you create a new branch, still flowing toward the future, but along a different route. Changed.” In other words, an alternate timeline. But another character suggests something different, that the river of time “is the Mississippi” and any changes we make are the equivalent of “lobbing what amounts to a pebble into it.” He concludes, “That's a very few tiny ripples in a kind of big body of water, don't you think.” I like this image of time as a river, flowing from the past towards a future, with the idea that whatever big rocks are thrown or dropped into the river can change the flow around the rock (change some events in time) but not the flow of the river as a whole. Time continues forward with a few changes but it all flows en masse together towards the same end.

This kind of approach to time travel resonates with me because it echoes and makes the most sense in context of the larger Story of which we all are a part. If Scripture is right, we know how the larger framework of the Story ends, this river of ours moving towards a sea of endless boundary. Though evil and darkness throw pebbles, stones and even drop boulders into that flow, the waters of time—permeated with God’s love, goodness, just-ness and right-ness—flow around it towards redemption, renewal and life. There is an abundance of free will within that flow, but nothing will change where that Story is going.

The Star Trek universe, at its core, has an optimistic bent, too. Recently, SF Gospel’s Gabriel McKee was interviewed by Read the Spirit, in which he notes how optimism permeates the ST universe. Now, normally I’m not a fan of utopian universes, but I like how McKee works this out and it makes me realize that we could say that Roddenberry’s vision of where we will end up is also a sea permeated by life and goodness as well. In other words, Roddenberry sees a happy ending for the human race.

Add to this Abrams penchant to explore (if not even suggest) if and what larger forces—be it time, destiny or fate or the work of larger entities—are at work in our existence, and I don’t think it’s a stretch to suggest that something akin to the above theory of time can be drawn from this story.

Of course, perhaps what I’m gleaning is too heavily influenced by an emphasis on a optimistic Star Trek universe (which also tends to take for granted there are scientific explanations for all events) and my draw towards Abrams work, but I think there’s also support within the film itself for this context. I find this especially in the elder Spock, a staple for scientific approach, longevity and context in the series. Spock, while initially surprised by seeing the younger Kirk, accepts his presence very quickly. And when he runs into Montgomery Scott, he’s “fascinated.” Later, he tells his younger self that his willingness to not show himself earlier as “faith” that the relationship between the younger Kirk and Spock would take the same route as it did in his own past. We could chalk all this up to sloppy writing, but what if we consider it as Spock’s fascination with the way time is moving in spite of the boulders thrown in its flow? I think that if we are allowed to carry with us Spock’s history and personality from the original Star Trek universe, then perhaps we have a foundation to at least speculate that Spock has faith that theirs is story that is flowing towards an optimistic end, a story that will flow forward even around boulders of horrible suffering and loss.

Another aspect that I really enjoyed within this story is that it explores the interplay between free will and destiny. I was thrilled by the language of choice, choosing a path and potential—even in darkness and suffering—within the film (a favorite theme of this blog). And it reminds me a lot of one of the main themes of Nemesis, my favorite of the Next Generation films, in which Captain Jean-Luc Picard must deal with a younger clone of himself who endured a horrific childhood and has bent himself on revenge. Picard struggles with the dilemma that Shinzon poses to him: While Shinzon and he share the exact same physical makeup, they are drastically different people. At one point, he tells Shinzon that in spite of all he’s done and has been done to him, he has a choice:

Buried deep within you, beneath all the years of pain and anger, there is something that has never been nurtured: the potential to make yourself a better man—and that is what it is to be a human. To make yourself more than you are.

Shinzon ultimately chooses a path towards death and destruction, and there is genuine sadness in Picard because he has faith that Shinzon really could have made a different choice. I find both of these films echo the greater truth that we all have the opportunity to be better people—the people God created, intends and enables us to be.

Am I reaching a little too far to get some of what I do out of this film? Maybe—but maybe not. Either way, I found Star Trek a great journey, a familiar voyage that I enjoyed watching begin once more. It’s a story that’s not only fun to watch but one that also brings God-talk into open spaces—and one that I look forward to seeing more of. And, I must add, the film has made it onto my list of favorite films and will soon have a place on my living room walls.


For more thoughts about the film see Peter Chattaway’s review at Christianity Today, Ken Brown’s post at C. Orthodoxy, Jeffrey Overstreet’s review at Looking Closer, and this interesting article at the NY Times.