Ode to a watchmaker 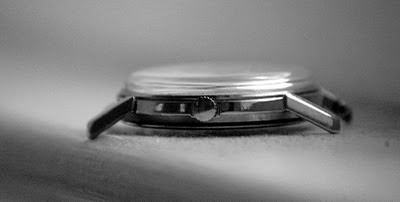 I do him an injustice. He’s not simply a watchmaker. Not that watchmakers are anything to sniff at. It’s just that this man is more than that.
He is a jeweler by trade, and the shop that bears his name is a corner space in an unassuming row of two-story office buildings on a side street that house dentists, attorneys, and medical suppliers. You have to ring a buzzer to get in. There must be a camera outside somewhere because when I sat across from him I noticed a tiny television on the corner of his desk crowded with binders, a backless pocket watch in a display case and jeweler tools and cases. It is a tiny shop, with display cases and counters lining three walls, exhibiting the jewelry he’s designed over the decades. Framed certificates, letters, pictures and yellowing newspaper articles surround the single window on the front wall. And when you enter, there’s no sound except the ticking of a clock—not the clicking of an electric or battery powered clock, but the more substantial tick-tock of a clock wound by hand, the kind my grandfather made and my mom still has sitting on a shelf in my childhood home.

I was there because I’d met him the day before. I’d Googled watch-repair and brought in an inexpensive Timex I’d given my husband a decade before that needed a new band. Our twenty-first anniversary was coming up in a few days, and I wanted to do something special. This big, gray-bearded man patiently took that watch in his large fingers and then somewhat bemusedly and tolerantly sent me on my way because, well, quite frankly it was an inexpensive Timex and I could get what I needed at a far cheaper price than what he could offer.

But the encounter lingered in my thoughts, and I mentioned him to my husband who promptly suggested that I bring the jeweler-watchmaker the 35 year old Swiss watch that had been his father’s but had stopped working; it was no more expensive than the Timex, but a special watch for my husband, one that he hadn’t found anyone able to fix. Come by, the jeweler-watchmaker said when I called that morning. It’s a “one-stop deal,” he said—in other words, if he couldn’t fix it, no one could.

As I watched the jeweler-watchmaker look at the watch under his half-rimmed glasses and lamp, talk more to the watch than to me, tell me of a renowned craftsman he knew in New York who could make the part the watch needed, and then show me pictures in a simply bound photo album of the impossibly minute and intricate watch parts he’d crafted himself, I suddenly felt as if I’d encountered Hellboy’s troll market or Harry’s Diagon Alley. And before me that watchmaker-jeweler could have been of the likes of Gandolf the Gray, Dumbledore, Professor Broom, Farwender, or Doctor Cornelius.
I’d suddenly stepped into an ancient world—one I had somehow missed and yet, here, miraculously encountered. It was one I had no doubt heard about but never actually gave much thought. A world of masters and craftsmen and art that exists in the unseen corners and out of the way nooks of this world.
And I was mesmerized.
In some ways, that encounter was tinged with a sense of loss. How is it that we live in such a rushed, technologically advanced world that artists and craftsmen occupy spaces the equivalent of back alleys? Not that I’m against technology—hey, I love my iPhone, and I’m writing this on a laptop that I’d have a hard time being without. I can’t keep the grin off my face when I walk through the automatic doors of a Best Buy. But it was with a profound reluctance I walked out of that shop. I was walking out of a world that hummed with something which the one I walked back into did not. In that shop, it was as if time had crushed in on itself; it could have been horse hooves or blasts from rocket cars outside, but inside that shop time slowed, lingered and was at rest. It was simplier, more patient, quieter, art-full—and, well, magical. It was a world that reminded me of the unexpected appearance of flower fairies in Spiderwick Chronicles, the startling and sudden movement of Ents, or a first encounter with the talking animals of Narnia.

Something about that shop and the jeweler-watchmaker echoed of something more solid than the existence we filter and water down around us; it was like shifting into an Amber-like shadow closer to true and real. Walking out of that shop I woke a little, rustled off a stupor. I opened my eyes within a world to another, sharper reality. I slowed down. I listened. I rested. I stood still even though I moved.

I guess that shop was like those other unsettling, brief moments when I unexpectedly encountered Other-ness. Moments that shock me a bit, moments of the strange, beautiful and extraordinary I’d forgotten. Moments that feel as if I’ve encountered a rip or tear in the world, that remind me of the bigger, vaster, unexpected one I inhabit.

And ultimately, these are moments that remind me of God, because as I remember the exquisite, strange and stunning world in which I walk I also remember who I am, who God is and the reality of the Land in which I really live. Too often I relegate God and his Kingdom to ideas in some book, belief or theology rather than a real, palpable, tangible existence around me.

And then the wonder hits all over again.

And this time, I owe it to that expert, tolerant, quiet, art-full craftsman who held my father-in-law’s watch in his skillful hands.

I suppose it's not hard to suppose that the craftsman in his shop is something that is passing away, but I wonder if his world isn’t just quietly bidding its time, resting in the corners of this technologically rushing one, secure in and knowing its value and gifts are certain to endure. And that makes me pause and ponder, because I can’t help but wonder if the Kingdom and its Creator don’t do the same—and perhaps there’s something we need to learn from that.