TV Snapshot: Getting to the "Roots" of our troubles


In SyFy's Haven, “the troubles” abound. A wide range of “supernatural afflictions” and abilities that have laid dormant in the small town’s population for decades—including things like moods influencing weather, bringing stories to life, and the inability to feel pain or physical sensation—are surfacing again. Alongside the town’s acting sheriff (who himself is afflicted by a “trouble”), FBI Agent Audrey Park helps to uncover the troubles and works with the townspeople to confront and overcome them—even as she searches for the truth behind her own mysterious connection to the small Maine town. In last Friday's “Roots,” Audrey ‘s date with town resident Chris Brody is interrupted by another appearance of the troubles:  tree roots are attacking people during preparations for a wedding between a bride and groom from feuding families. While somewhat heavy handed, the episode provides a good image that helps us understand the nature of anger and hate—and the power of love to overcome them. 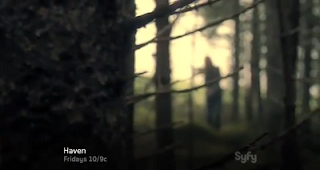 The episode culminates when Audrey, Chris and both families are trapped by the roots in a remote barn. As Audrey investigates, she discovers that the roots attack and grow stronger every time one of the members of the two families gets angry and express their hatred. Each of the families blames the other for the attacks, and neither believes they themselves have anything to do with it. Then Audrey uncovers that the same troubles flared 50 years before, when a member of each family—both of whom are now trapped in the barn with everyone else—fell in love and planned to elope; but the brothers of the bride’s family attacked the other and the roots came out of the forest and attacked them all, killing the youngest brother of the bride. The surviving brother lies and tells his sister that her fiancé was responsible for the death, feeding the feud between the two families. When Audrey helps the families reveal the truth of the past, both begin to realize their culpability: the roots feeds on their shared anger and hate. Relationships mend and reconcile and the roots begin to retreat as the families walk out of the barn two-by-two.
The attacking roots are a helpful organic image that reveals some important aspects of how anger and hate can stalk, trap and destroy not only the people harboring those emotions but also the people around them.
First, the roots echoe how anger and hate are much larger and more menacing forces than we often realize. They aren’t simply limited to damaging the people who harbor those emotions and those they direct their anger and hatred towards; it affects entire communities. And innocent people get caught in the crossfire—as this episode demonstrates when a caterer with no connection to the family get dragged off into the woods by the roots when she tried to flee. 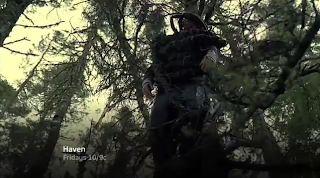 I also appreciated how the roots attack the family members without discretion; they all are responsible for the trouble and their harbored anger and hate can rebound and turn on them at anytime. This echoes a biblical truth: “Anger boomerangs,” says the sage in Ecclesiastes. “You can spot a fool by the lumps on his head.” Or as it plays out in Haven, by the lacerations and wounds on the family members who were attacked by the roots.
This episode also reveals that while troubles resulting from hate and anger seem to be attacking us from the outside, they are often rooted within us. Our first instinct is to blame those at whom our anger and hate are directed for these afflictions. As Elihu puts it, angry people “pile grievance upon grievance, always blaming others for their troubles.” But the troubles, as this episode reveals, are literally rooted in us—and to end those troubles we must start with ourselves.
That’s what helps Audrey stop the attacking roots. When Chris—a scientist and himself afflicted by a trouble—wants to solve their situation by attacking the tree roots themselves, Audrey sets him straight:

Chris: What we need are chainsaws, heavy equipment, maybe some industrial weed killer—”

Audrey: You think the problem is plants? No, the problems in Haven, they come from people.

Chris: I understand this town has a lot of human aberrations—I am one. But if you want to understand them, you don’t hold their hands; you observe what they do. That’s science, that’s how you learn.

Audrey: So, you think they’re a science project? Like me, because I’m immune to you?

Chris: Come on, don’t make this about you.

Audrey: No, I’m not making this about me, okay. I just wanted you to help that poor girl.

Chris: And I am—by trying to find something we can use to get out of here!

Audrey: It’s not something—it’s someone. Alright? In Haven, it’s always someone. That’s how we’re gonna get out of here.

After Audrey realizes the roots attack when the families express their hatred towards each other, Chris tweaks a scientific principle and suggests a way to neutralize the roots that is more along the terms Audrey is pursuing: “Love is the answer,” he tells her. Audrey latches onto this idea and approaches the estranged couple at the root of the problem. By approaching the troubles as rooted in the people—the “someones”—Audrey is able to get at the real problem and facilitate reconciliation and overcome “the trouble.” At the end of the episode, Cody recognizes how remarkable her actions are: “You got two people who’ve hated each other for over 50 years to fall in love again today. I’d say that’s pretty amazing.”
Anger and hatred are dangerous and deadly. “Anyone who hates a brother or sister,” says John, “is a murderer.” In this episode, that is put into literal terms: the two families don’t kill by their own hands but with their uncontrolled anger and hatred. This episode helps us understand how anger and hatred inflict a damage on others and ourselves as deadly as lethal force.
But it also demonstrates the power of truth and love to overcome those deadly forces. Audrey has developed a genuine care for the people of Haven. She understands that the troubles are often not understood by those who are afflicted with them. She helps those afflicted to acknowledge, understand and master their troubles—often at risk to herself. In other words, she actively loves the people of Haven.
And, ultimately, that challenges us to remember how we are called to approach those around us and get to the root of our troubles: not with anger or judgment but with compassion, truth and love.