Musing on Venditti's 'The Surrogates' 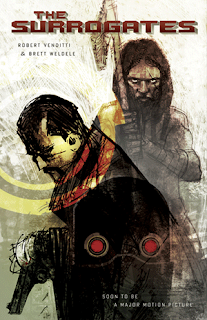 Today, I finished reading Robert Venditti’s The Surrogates, a science-fiction graphic novel that the upcoming film of the same title is based upon. It was a quick and interesting read—with more than its share of God-talk.

In short, the novel opens in 2084 in a world where people live vicariously through near-perfect android substitutes called “surrogates” and never leave their homes. Crime and death rates are at all time lows. But cop Harvey Greer is investigating a mysterious figure (whom Greer coins Steeplejack) that has fried and destroyed two surrogates. As the investigation deepens, we find out that while the majority of the population is deeply invested in (and even addicted to) using surrogates, some folks fear human dependence is doing more harm than good, keeping them from really experiencing and living life.

I found that the novel very relevantly addresses and explores themes related to our own struggle with virtual reality and technologies (from MMORPGs to blogs, forums and boards where we can create our own identities and personas) that allow us to communicate and interact without leaving our homes. Is there a relationship between technology and wealth? How does that affect the “have-nots”? Do we buy into the illusion that wealth and technology can protect us from the reality of death, suffering and darkness? How do these kinds of technologies change the way we relate to each other? To the world around us? Is there something lost? What? And is whatever we gain with our use (and, yes, abuse) of that technology worth the sacrifice of whatever we lose?

I can’t help comparing the novel to Watchmen, another graphic novel I’ve read—and one that made it to the big screen last year. But perhaps that isn’t fair, as there are significant differences between the two. The Surrogates isn’t as complex or multi-layered as Watchmen—but, then again, it isn’t nearly as long or as loaded with multiple characters, point of views and storylines. As a result, I found The Surrogates much more honed (and even at points, more compelling) in its storytelling. It sticks mostly to the point of view of Greer, to whom (even though we don’t get his thoughts or even a voiceover) I grew surprisingly attached and empathized with in the short amount of time the novel takes to read.

In addition, there’s a depth added to the shorter story through its use of “invented texts” (such as newspaper images, transcripts, ads, and academic texts—and a technique also used in Watchmen) as well as its use of biblical phrases and references. It’s probably no surprise that it was latter aspect that intrigued me the most—though I’m not quite sure what to make of it. Most of the religious language and references in the novel come from The Prophet, a man named Zaire Powell III who was sentenced at 13 years old for killing his family but we’re never quite sure he was actually guilty. After his release from prison, Powell becomes the leader of the Dread movement, whose members are against the use of surrogates on the basis of religious convictions, calling surrogates “abominations” and those who use them as having chosen “the path of idolatry, avarice, and vanity.” While there isn’t much other in the novel other than his speeches that connect The Prophet with Jesus, he obviously thinks of himself (as do his followers) as a Christ-figure, which is accentuated by his use of messianic scriptural language. While The Prophet describes God as one “of wrath as well as love,” there is little if any love referenced or explored in his part of the story. Instead, most of the religious language and references are related to judgment, an “hour…soon at hand when He will rain justice on the wicked and the profane.”

Casting this kind of imagery and language onto The Prophet definitely has the potential to add weight and depth to the character as well as his anti-surrogate stance and the story itself. But when I finished the story, I wasn’t sure if the religious subtext dug as deeply as it could. At some level, it feels as if it’s more a tool than an honest exploration. When I dug a little to find what others might have thought about this, I didn’t find much but I did run across an article at Wired by Scott Thill about the novel’s adaptation to film that included an invented text that wasn’t in my copy of the novel (though it may be from the follow-up graphic novel Flesh & Bone that chronicles the events 15 years before The Surrogates). It is an image of an invented religious text referencing the gospels, in particular texts concerning the perils associated with wealth (Mark 10:25 and Luke 6:24-25) and the outcast nature of Jesus and his followers. And I was intrigued by Thill’s comment following the image:

Venditti externalizes that patchwork philosophy by mashing up The Surrogates' format, careening between subtle comic art and invented critical, marketing and religious texts. The result is a multilevel treatise on a social identity crisis in search of solutions.

I resonated with Thill’s insight because it helped me appreciate how the religious text and references open the avenue of faith as an option in our exploration of and solutions to the crisis technology is thrusting upon us. Even if it’s being used more as a tool rather than an honest or in depth exploration, it is valuable to have that avenue opened.

Regardless of how we answer the question of how religion is being used in this novel (and I can see valid arguments on both sides), I can’t help but think how these themes and the story itself invites those who follow Jesus to examine their own lives. How does wealth and technology influence and affect our relationship with Jesus? Each other? How can we use technology is helpful ways and avoid the traps of its abuses? How should we approach these issues and problems in our discussions? How does our faith and trust in God address some of the questions the themes raised in this story? 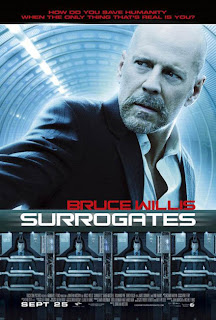 And, as a final note, I am now wondering how the differences between the novel and the upcoming film (due out September 25) will affect the themes and storyline developed in the novel. (Warning: minor spoilers ahead.) In the novel, Steeplejack’s destruction of the surrogates does not kill their users as it seems to do in the film. In addition, the creator of the surrogate technology is apparantly killed early on in the film while in the novel this is not the case. It’ll be interesting to see how this all plays out.

In any case, I enjoyed the novel and I’m looking forward to the film more than ever—and I’m betting it’ll bring even more God-talk into these open spaces.