The faith of 'Kings' 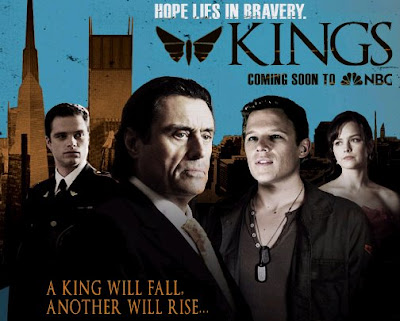 The new NBC series Kings--a pseudo modern-day take on the story of the biblical King David--has been on this blogger's radar for a few months, and today I ran across an interview with exec producer Michael Green on SciFi Channel's site which expounded a bit further on the connection between the series and the biblical story of David as well as the element faith will play in the series:

Green added that he enjoyed contemporizing the familiar story. "Taking these elements and thinking, 'What is Goliath in this world?'" he said. "And taking these touchstone elements that people do know from the story and bringing them to life in a new way. We are taking inspirations from the original Bible story, so it's very much a story of one king rising while another one falls. It's a way for me to tell Godfather-like stories or these operatic stories."

But Green said the series is not literal in that he plays with the iconic story and that it veers into what he calls "soft sci-fi." "I'm not afraid of sci-fi, and I love it," he said. "We didn't want to do this as a space opera. We wanted it to be a familiar world, but at the same time we are inventing a world. We had a lot of fun inventing what this world is going to look like. We are taking New York and impressing our own aesthetic and own iconography. We got to have a lot of fun with that. I remember talking to David Eick about this when he was doing Battlestar, and he said they were always asking themselves the question 'What do doorknobs looks like?' We decided that we wanted to have things look like they could fit in our worlds, but you're not sure what city it is."

Green said that part of the SF element has to do with the idea of "magic, faith, happenstance, luck, God." "I look at it as the hand of faith guiding the heroes," he said. "I'm curious to see how people perceive that. The ongoing discussions when people see it are 'Is that magic? Did something just happen beyond physics? Is it something special or luck?' I won't answer that and will let people interpret that."

I find it interesting that Green looks at the faith aspect in the series as a sci-fi element. I've long thought sci-fi is a good venue for exploring themes related to faith, but I hadn't thought of it as an element specific to science fiction. It makes me wonder if perhaps science fiction and fantasy have become safer or more acceptable genres in which religion and faith can be explored, thus making those themes more associated with those genres. I'll have to research that one a bit more.

For more on Kings, see NBC's site and the series of posts over at Matt's Bible Films Blog. The series is slated to begin midseason in 2009.