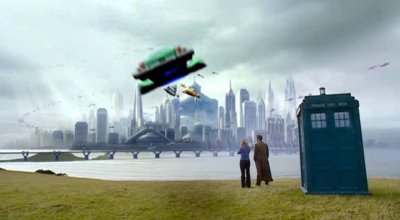 Well folks, (as Mirtika has already noted) the second season of the BBC’s regenerated Doctor Who has premiered here in the States (they are on their third season across the pond). As I’ve noted before on this blog, this campy-but-social-commentary sci-fi series occasionally comes up with an episode that brings God-talk into the open—and a recent episode did just that.

"New Earth" follows the a newly regenerated Doctor and his faithful companion Rose five billion years into the future to a planet called New Earth and a city called New New York, which houses a hospital and a patient from which the Doctor has received a summons. It doesn’t take the two long to find out (through a series of adventures I won’t get into here) that the hospital’s uncanny success at curing any deadly disease is the result of keeping hundreds of “artificially grown” humans confined in pods (reminiscent of the walls of pods we saw in The Matrix) and infected with a thousand diseases in order to breed cures. If the humans gain consciousness enough to speak, they are incinerated. 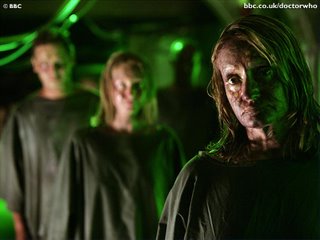 Through a series of misadventures, the human subjects—whose overwhelming loneliness and longing to be touched after being kept in isolation all their lives is accentuated by the fact that their mere touch immediately infects and kills anyone they physically connect with—are freed and start spreading through the hospital asking for help but inevitably killing everyone they touch.

“Pass it on! Pass it on!” screams a joyous Doctor, as he urges the now healthy humans to touch their fellow sufferers. They gently embrace and touch each others’ faces and hands, spreading the cure and experiencing the joy of contact.

“What did they pass on?” asks one of the characters, who couldn’t see what was happening. “Did you kill them?”

“No,” laughs the Doctor, “that’s your way of doing things. I’m a Doctor and I cured them.”

One of the newly cured comes up and wraps her arms around the Doctor who smiles and embraces her with joy.

“It’s a brand new form of life,” he explains, “. . . kept in the dark, fed by tubes, are now completely, completely alive!

Now, I know it’s a campy science fiction television show, but I actually was moved by this scene. Why? Because it reminded me of Brian McLaren’s image of God's Kingdom from The Secret Message of Jesus (which I’ve grafted from an article adapted from the book here at Sojourners):

We might adapt the metaphor and speak of the medical mission of God, adding the relational connotations of caring and healing. Imagine that everyone on earth has become infected with a horrible virus. The virus makes people physically sick and mentally insane. Its symptoms vary from person to person and place to place: In one place it causes violence, in another sexual aggression, in another lying, in another paralysis, and so on.

Imagine that a doctor develops a cure. He brings the cure to you and says, “Once you take this medicine, you’ll begin to feel better, but I’m not just giving you the cure for your sake. As soon as you feel well enough, I want you to make more of the cure and begin bringing it to others. And tell them the same thing: they are being healed not just so they can be healthy but also so they can become healers for the sake of others.” Just as the disease spread “virally,” now the cure will spread. A healing mission—where you are healed so you can join in healing others—would be an apt metaphor for the kingdom of God.

This campy Doctor Who episode captures this image of the Kingdom very powerfully. This deadly disease of sin—an infection that we are in fact born with—not only brings death but isolates and separates us from each other, causing immense loneliness and even enmity. It keeps us in the dark, feeding on a bare semblance of what life is meant to be. But the cure—this love and grace and redemption of God—is more powerful than the disease, more powerful than death. And not only does it cure the disease of death, but it makes us complete, alive and able to touch and love and connect with each other. It brings true, real and complete life—the way it was meant to be lived.

Life, indeed, is more powerful than death in ways we cannot even begin to comprehend. In the words of the Doctor’s joyous cry: Life will out!

Brian McLaren and Doctor Who. Who’d have thunk it?