Reading "Redshirts" on a train: a rambling and personal review 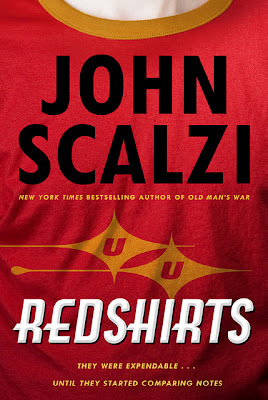 I discovered John Scalzi during an episode of Stargate Universe. In a rather inconsequential scene, I noticed a man reading a novel. Curious, I played back the scene, froze the image, and scribbled down the title: Old Man’s War. After the show, I looked it up and found it was the Hugo-nominated first novel of Scalzi, who also served as a creative consultant on the series. It was a good read, and Scalzi stories started showing up in our library.

Last summer, we added Scalzi’s eighth novel, Redshirts: A novel with three codas. Both hilarious and affecting, Scalzi’s sci-fi novel follows a group of ensigns on a starship who start to wonder why it is their rank has such a high death count on away missions.* The novel’s title refers to the proverbial fate of the “redshirt” extra on Star Trek. “In the original Star Trek, Kirk, Spoke, Bones and Scotty were very dangerous men to stand next to if you were wearing the ensign’s red shirt,” explains John Schwartz in a NY Times article about the novel. “The ensigns exist only to create a sense of danger when they die or get wounded,” observes Rowan Kaiser in an AV Club review of the novel, “otherwise, they’re expendable.”

Most reviews suggest Redshirts is an ambitious undertaking that may not always succeed, but overall critics are favorable. Indeed, the novel takes on everything from a multi-layered meta-narrative to commentary on the value of fiction and the responsibility of the writer to story and their characters to exploring how we relate to each other and the universe around us. As for me, I laughed out loud and thoroughly enjoyed the read, but I particularly appreciated how the novel’s layered meta-narrative invites some good questions and the way it made me think about the way I relate to people around me.

Interestingly, Scalzi makes a direct reference in one of the novel’s codas to Stranger than Fiction, a film that also plays with meta-narrative and raises similar questions. Critic Peter Chattaway articulates those in an article about the film at Christianity Today:

Do we have any control over our lives? If our lives do have an author—God, the Fates, whatever one believes—is this author necessarily on our side? How important is it that our deaths be "meaningful"—or, for that matter, that our lives be "meaningful"? Does "meaning" come from within us, or from somewhere outside of us?

When it comes to questions of control, fate and God, Scalzi’s universe allows for the idea of a God or an Author but, if there is one, he’s either absent or more like us than anything else. Instead, Scalizi focuses more on the power, effects and responsibility of our actions on each other and the world. The main character, Dahl, has a background of faith. In a conversation about why all the bad things are happening to them, another character questions how Dahl can maintain his faith when God acts like “a hack” who “can’t plot His way out of a box.” Dahl responds, “Because I don’t think that’s actually God…. I don’t think any of this is the work of God, or of a god of any sort.” Whoever is doing it to them, Dahl says, “they are just like us. And that means we can stop them.”

Personally, however, I find Redshirts’ exploration of what makes a life meaningful to be its strength. The novel affirms our ability to make meaningful choices and live a meaningful life regardless of our circumstances. One set of characters come to that awareness out of the experience of being treated as expendable; they choose to make meaningful choices out of and in spite of the hand they’ve been dealt. Another set of characters come to this awareness after being confronted with how their actions profoundly affect the lives of others, and that changes the way they see people and life in general.

Ultimately, Redshirts challenges us to be intentional with our lives and calls us to remember that no one is an extra or expendable. In its own quirky way, the novel affirms that our lives are meaningful not only in what we choose to do with them but even more so in making those choices with the best interest of others in mind, even though it may go against our own.
I guess you could say, then, Redshirts reminds us what it means to love.

Now I am aware I could be reading too much into Redshirts. Where and when I read the novel most likely influenced my take on it. I read the majority of it on two plane trips between DC and California and on a train traveling through the San Joaquin Valley. Both trips West reunited me with family and friends, but the first was weighted by the knowledge that it would probably be the last time I would see my husband’s father, who was battling bone cancer. The second, weeks later, was for his funeral.

The import in these journeys added a personal significance to the novel’s questions—and unexpectedly and somewhat oddly, the contrast between the modes of transportation I took helped me sort through them.

Air travel is fast, but insulated. Frankly, I don’t enjoy it all. You face forward, stare at back of others’ heads and look out tiny windows through which mountains are anthills and people even smaller than ants. A train is much slower, but it hugs the earth. Many of the seats face each other. And the wide windows reveal every vineyard and barren field, citrus tree and graffiti covered fence, half-million dollar suburban house and broken-windowed shack. And people are as big as life.

At one point on the train, I looked up from reading and looked out the window. The train was moving slowly through a neighborhood. I watched a young man walk out the door and down the sidewalk in front of a house. As I watched this person I did not know and would never meet, it struck me how our tendency is to look past each other as “extras” in the story of our own lives. We get so focused on our story that we forget the larger Story—a Story in which each person is indispensable.

But the reality is that each person we encounter is a walking universe. “There are no ordinary people,” says C.S. Lewis:

You have never talked to a mere mortal. Nations, cultures, arts, civilization—these are mortal, and their life is to ours as the life of a gnat. But it is immortals whom we joke with, work with, marry, snub, and exploit—immortal horrors or everlasting splendours. This does not mean that we are to be perpetually solemn. We must play. But our merriment must be of that kind (and it is, in fact, the merriest kind) which exists between people who have, from the outset, taken each other seriously—no flippancy, no superiority, no presumption. And our charity must be a real and costly love, with deep feeling for the sins in spite of which we love the sinner—no mere tolerance or indulgence which parodies love as flippancy parodies merriment. Next to the Blessed Sacrament itself, your neighbour is the holiest object presented to your senses.

This man—whom I will never meet—is like me, I thought, and I am like him. He’s not expendable, and neither am I. We are sacred neighbors.

When I remember this, it changes the way I see others and the way I see life. Sometimes a story reminds me of this, like Redshirts. Like the characters in that story, sometimes it comes to me in times of great crisis when I’m confronted with my own mortality or the way we affect each other’s lives.

But, either way it seems to come more often when I slow down. Sitting there, I realized it is all too easy to insulate myself in a metaphorical tin can, fly detached above it all, stare at the backs of people’s heads instead of in their eyes, and regard people as ants instead of immortal beings. Perhaps I need to think about moving through life more like a train, hugging creation, taking time to stop in places I normally may not go, pausing to see both the beauty and the darkness, riding with patience—the journey as important as the destination. When I slow down, I pay more attention. I see people instead of look past them. I remember that there are no extras but only sacred neighbors in our Story.

My father-in-law, a man of deep love and God-belief, traveled life this way. No one was an extra. People remembered most being loved by him and how he loved others. And that is a meaningful life—by Redshirts’ standards and God’s. And his life not only reminds me how life can be lived but challenges me to live it the way he did—loving God and others.

That is how we were created to live in our Story. That Story has an Author, he is on our side, and he wants for us a happy ending. And meaning flows from Love—being loved by him, loving him and loving others.

Ultimately, then, Redshirts helps me to remember of all this. And that God is not remote; he is near. We live and move in him, even while reading a science fiction novel on a train.

*I am not giving away anymore on the plot than this. A great deal of the fun in reading this novel is in the twists in plot and meta-narrative.