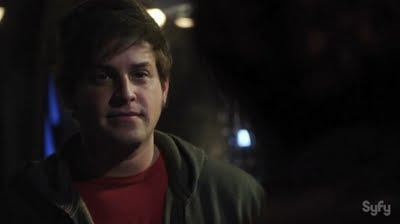 "Anyway, what's the point of having potential if you're not going to step up when you're really needed?"

The final episode of the recently cancelled series Stargate Universe was a moving end to the thought-provoking story of the marooned crew of the Destiny. It was so fitting that it is Eli we see in the last shot, a character that has developed and grown to the point where he could step up without regret to sacrifice his own safety and potentially his life for the crew of the Destiny who, in spite of their wide range of differences, has become a true community. Indeed, one of the things that drew me most to this series was its exploration of what it means for a group of diverse people to be a community. Ultimately, it comes down to learning what it means to love. And what is the ultimate act of love? To put the best interest of others above your own: "There is no greater love than to lay down one's life for one's friends," says Jesus.

Farewell, Destiny. See you on the other side.