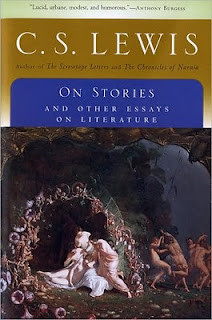 I spent an hour this morning with C.S. Lewis as he reflected On Stories and here are a few tidbits from his essay “On Science Fiction”:

~It would seem from the reactions it produces, that the mythopoeic is rather, for good or ill, a mode of imagination which does something to us at a deep level. If some seem to go to it in almost compulsive need, others seem to be in terror of what they may meet there. But that is of course only suspicion.

~It is not difficult to see why those who wish to visit strange regions in search of beauty, awe, or terror as the actual world does not supply have increasingly been driven to other planets or other stars. It is the result of increasing geographical knowledge. The less known the real world is, the more plausibly your marvels can be located near at hand. As the area of knowledge spreads, you need to go further afield: like a man moving his house further and further out into the county as the new building estates catch him up.

~Many reviews are useless because, while purporting to condemn the book, they only reveal the reviewer’s dislike of the kind to which it belongs.