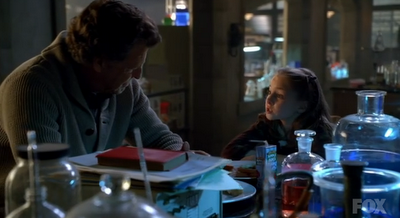 Walter is telling Ella a fantasy-like detective-noir story which metaphorically parallels what is going on in his own life, in particular his search for his grown-son Peter, who has disappeared after discovering that Walter has been keeping a dark secret from him. In the story—which begins with “once upon a time”—Peter has a magical artificial glass heart invented by Walter, to whom Peter lent it. But when Peter left he took his heart with him and Walter is dying without it. So Walter sends people after Peter to get the heart back. When Peter tracks the heart back to Walter, Walter begs for Peter’s forgiveness but Peter refuses and leaves. Ella looks at him in disbelief—

Ella: That’s not a proper ending! Don’t you know all good stories start with once upon a time and they end with happily ever after?! You don’t know how to tell stories, Uncle Walter. I’ll tell you how the story ends:

…And Peter looked inside Walter’s eyes and realized that there was still goodness inside of him. So Peter took his special heart and with all his might he split it in two. And the heart was so magical that it still worked. And together they made goodness. And lived happily ever after. The End.

Walter looks at Ella, sad, and smiles softly. It is the ending, deep within, that he hopes for.

I absolutely loved this scene in the “Brown Betty” episode of Fringe. If Scripture is right, we ourselves are living in the midst of a Story that begins akin to “once upon upon a time” and ends happily ever after. We were created for a good world, where we walked with God and each other in the wide open spaces of his grace and glory. Then came the day our hearts ripped and broke, when the cancer that is sin seeped into our very core, fracturing our relationship with God, others and the world around us. But God—from the beginning—works to fix it all. And though we stumble, both suffer and cause it, and live in the midst of evil and darkness, the Story is permeated with God’s love, goodness, just-ness and right-ness, moving ever towards redemption, renewal and life. He relentlessly works to bring us and his creation back to the way we were mant to be. The Story has a happy ending. Indeed, there is a “happily ever after.”

So, I’m with Ella: good stories end with “happily ever after.” Oh, yes—Amen!

With all this going for us, my dear, dear friends, stand your ground. And don't hold back. Throw yourselves into the work of the Master, confident that nothing you do for him is a waste of time or effort. –Paul, in a letter to believers in Corinth