Musing on lepers and transformation 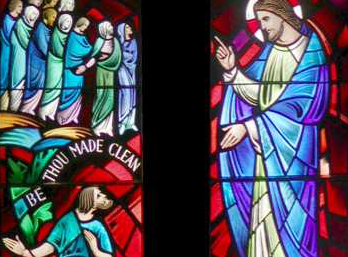 Over the last couple of weeks, I’ve been reading and mulling my way through Luke’s account of Jesus. A couple of days ago, I hit the part where a group of 10 lepers encounter Jesus, and it struck me that a phrase Luke uses goes a long way in reminding us how transformation works.

The encounter is a short one. Jesus is on his way from one place to another, in a region in between Samaria and Galilee. The lepers must know he’s coming because these outcasts are out in public and they seem to be waiting for him. But they keep their distance from him, calling out to him from a ways away instead. Jesus takes “a good look at them” (as The Message puts it), and without fanfare or preamble, simply tells them to show themselves to the priest.

That’s it. Nothing else. This must have filled those early listeners with anticipation—or at the very least, struck them as odd—because (according to the NIV Study Bible notes) Jesus’ instructions were those customary after a cure to an illness. But these guys weren’t cured—yet.

Now, here’s the part that I’ve been mulling over: “And as they went, they were made clean” (my emphasis). They weren’t cured before they left Jesus. That happens on the way.

The first thing that strikes me about this moment is that this is a great image for how transformation works: walking in trust that what has been promised is so and will be—and then finding it so. And this strikes me because I find it so easy to get distracted from this truth, particularly when it comes to my own transformation. I love how Dan Stone describes this in The Rest of the Gospel (oft quoted on this blog):

Are you in Christ? If so, you are a new creation. At your new birth, God birthed in you a new spirit, created in His likeness, in holiness and righteousness (John 3:6-8; Ezekiel 36:26; Ephesians 4:24). . . . For the first time you are alive the way God meant you to be alive. In your spirit you are a completely new creation.

You are a new creation in Christ Jesus. The old is gone. To whom? To God. It may not disappear as quickly to you, in the seen and temporal realm, as you’d like. But it’s gone to God. He sees the unseen and eternal. He sees the first from the last. And He knows that the old is gone. The question is who’s keeping score? You or God? The old you is gone to the One who is in charge of the universe. To Him, you are not the same person you were before you entered into Christ. You are a brand new creation in Christ.

This is the truth of who we are—and, says Stone, “All we ever do is catch up with the truth. Through our trust in God’s revelation, His truth becomes our experience.” And that process, says Stone, can be confusing to us. Much of the time, we don’t feel like new creations, but the truth is we are:

In the unseen and eternal realm, God has already perfected us. In the seen and temporal realm, God is bringing that perfection, or completion, into view.

When you think about it, this really gets at what Eugene Peterson is saying in the quote at the top of this post; this transformation stuff is so not in our power. While there are ways we can cooperate with God in that transformation, it isn’t something we master or control. It is something we experience as we trust it is and will be so because he says it is so.

That doesn’t mean we don’t do anything. The lepers went on the way—they went towards the priests. They did what little was in their power to cooperate with God. For us, what little we have in our power comes down to what we’ve come understand as the “disciplines.” As Dallas Willard, Richard Foster and the other editors of the Renovare Spiritual Formation Bible put it:

The Spiritual Disciplines in and of themselves have no merit whatsoever. They possess no righteousness, contain no rectitude. Their purpose—their only purpose—is to place us before God. After that they have come to the end of their usefulness. But it is enough. Then the grace of God steps in, takes this simple offering of ourselves, and creates out of it the kind of person who embodies the goodness of God—indeed a person who has come to the place of truly loving even enemies.

The disciples are what little we have in our own power to cooperate with God. But they are like footsteps of those lepers heading towards the priest, not the power itself.

The second thing that strikes me about this encounter is the lepers themselves. This is a region between two others (one Jewish and the other Samaritan), and some scholars think that the group could have had a mixture of souls from both—which meant a mixture of worldviews and ideas about who God is. I wonder, did some of them leave Jesus hesitantly, looking over their shoulders, wondering what was up? They weren’t cured yet—why send them to a priest? Did some of them think the cure would come when they reached the priests? Did some do as Jesus instructed out of desperation because they thought they had nothing left to lose—and others in expectant hope because they actually trusted Jesus? Some, if not all, of them obviously thought Jesus could help them—they risked going out in public and they called him Master—and they could have convinced the others to join them. Or was this group a sliver of a larger group but the only ones who thought Jesus could help them?

But perhaps I’m projecting all those questions from my own experience. Because I’ve experienced a lot of those things as I’ve walked with Jesus over the years—from hesitation to desperation to trust. Interestingly, what it’s come down to for me is a choice to trust in spite of the rest of it. To walk along the way even if I have doubts, hesitations, fears or mistaken concepts of who God is and how he works. To put one foot in front of the other—usually a messy combination of disciplines, fumbles and stumbles—to act in trust that it’s all true even if I can’t see how it could be so.

It’s taking awhile but his truth is becoming my truth—and, unbidden by me, that’s breeding an expectant hope. More often, I find myself living “adventurously expectant,”as Paul puts it, “greeting God with a childlike ‘What's next, Papa?’ God's Spirit touches our spirits and confirms who we really are. We know who he is, and we know who we are: Father and children.”

And those times when it really sinks in that God’s truth is my truth, I'm like that leper who “when he realized that he was healed,” turns around and comes back to Jesus, full of gratitude, glorifying God, unable to thank him enough.

But, some times are harder than others. Some stumbles are more painful. And I gotta admit, there are too many times I’m like those nine lepers who were cured and never returned to Jesus. I get distracted by the transformation itself, by the little and big stuff of life around me, or chalk it up to coincidence or my own ability. Whatever the case, I lose sight of who I am and Who the transformation and Life comes from to begin with. I forget.

Here’s the thing, though: like those nine who never returned, I’m still cured. Go figure. Mercy and grace simply take my breath away.

And perhaps that’s something to remember here. The transformation we experience is from God. We are new creatures—and those creatures are born out of and live in the Life and Love of God. And that is not something, like Peterson says, that we mater or have much, if any, control. If we want to experience it—to let God’s truth be our truth—we simply must go in trust and show ourselves.

I don’t pretend to have wrapped my mind around this whole process—heh, I definitely haven’t. But this image of the lepers transformed on their way does help me keep things in perspective.