That talented and vivacious Cuban-American chick in Miami has tagged me, so here goes:

Four places I’ve been on vacation:
- Cozumel (fantastic water)
- Kaui (best scents)
- Florida panhandle (beautiful beaches)
- A trip down the California coast with my husband on a motorcycle (pre-kid stage of married life)

Four favorite foods:
- Muscles or clams
- Jalapeno popcorn
- Anything from south of the border
- Asian food 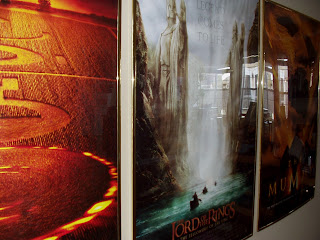 Four movies I could watch over and over:
Sheesh. These aren’t necessarily the most critically acclaimed films out there (or even the best of what I’ve seen), but (as Mir puts it), these are the ones “I could watch until my eyeballs fall out”
- "The Mummy"
- "50 First Dates"
- "The Lord of the Rings" (especially "Fellowship")
- "Casablanca" 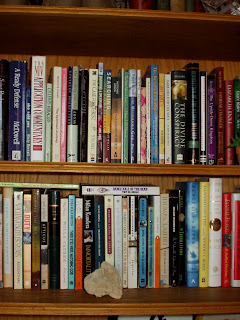 Four books I could read over and over:
I would never be able to narrow it down, so I’m just listing some of my fav fiction I read:
- "Stones for Ibarra"
- "The Hobbit"
- "To Kill a Mockingbird"
- "Wuthering Heights"

Four places I’d rather be:
Actually, I like where I am most of the time, but for those times when I don’t, these would do.
- A colony on Mars (heh, it's the astronaut thing)
- A meadow in Narnia or a hobbit hole in Middle Earth
- Taking a nap in an old villa in Tuscany (never been, but would like to)
- Or just taking a nap, heh

Four people I tag:
If they do this sort of thing (and don't feel like you have to--or if you already have, I must have missed that post, heh).
- Elliot
- David
- Melissa
- Kari

(Images: my souvenir flowers from Kaui and a pocket purse from Cozumel hanging on a mirror in our bedroom; a few of my movie posters; a couple of our books shelves)