January 13, 2007
Well, Thr3e—the latest endeavor of FoxFaith, the faith-film division of 20th Century Fox—tanked with critics. It’s running a very dismal 6% at Rotten Tomatoes (Russ Breimeier at Christianity Today gave it 1.5 stars out of four). Ouch. It made about $700,000 on its opening weekend in almost 500 theaters. For comparison, One Night with the King (a Gener8Xion film also under FoxFaith’s banner) opened in 900 theaters and grossed over $4 million. Granted, One Night (which, to be fair, only ran a 13% rating at RT—but Breimeier gave this one 2.5 stars and this blog liked it) cost almost $18 million more to make, but still. Sigh. Okay, okay. I won’t get on my soapbox about Christians and good art. For now. Letting. It. Go. Now. Yep.

Next up on the plate is The Last Sin Eater, due out Feb. 16, which now has a website. I liked this novel; in the Christian publishing arena, it’s one of the better. This film may have a better chance of succeeding seeing as it has more solidity to its story and a more experienced (though not extraordinary) cast. 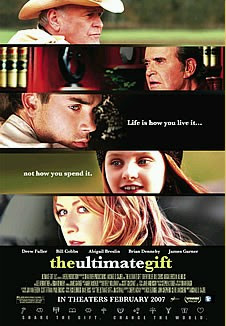 After Sin Eater comes The Ultimate Gift (on Mar. 9), based on Jim Stovall’s novel, which was published by River Oak, a Christian publisher. Um, I must admit I’m not familiar with this “best-seller,” but with the film’s cast, it looks like the best of the bunch yet. It boasts seasoned names like James Garner, Lee Meriwether and Brian Dennehy as well as younger up and comers Abigail Breslin (of Little Miss Sunshine fame who also starred in fav-of-mine Signs) and Drew Fuller (Charmed Chris Halliwell).

What’s it about? With a tag-line of “Life is how you live it . . . not how you spend it”, the film (according to FoxFaith’s site) tells the following story:

When his wealthy grandfather dies, trust fund baby Jason Stevens anticipates a big inheritance. Instead his grandfather has devised a crash course on life: twelve tasks (or “gifts”) designed to challenge Jason in improbably ways, sending him on a journey of self-discovery and forcing him to determine what is most important in life: money or happiness.

For more info on the film, try The Ultimate Gift Experience where you will also find the trailer. Jenny’s Blog has a bit about a screening she saw last fall.