Another film to keep your eye on 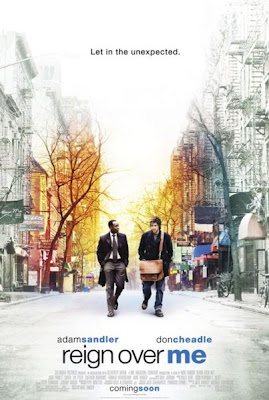 Here’s another film with the potential to generate God-talk in open spaces. I stumbled upon Reign Over Me as I was clicking through Apple’s trailer site. The film, starring Don Cheedle and Adam Sandler, offers a fictionalized story related to 9/11 (as opposed to United 93 and World Trade Center, which focused on recreating actual events). Here’s the synopsis according to Wikipedia:

Charlie Fineman (Sandler) has failed to recover from the grief of losing his family in the the tragedy of September 11th, 2001 and has completely changed from the family man he once was into a street person. After a chance run-in with Alan Johnson (Cheadle), his past college roommate who has since become a doctor, the painful healing process slowly begins.

You can see the trailer here or here. The film gets its title from Love, Reign o’er Me, a song by The Who and the last song from the English rock band’s second rock-opera Quadrophenia. Pete Townsend says of the song (read the lyrics here): “[It] refers to Meher Baba's one time comment that rain was a blessing from God; that thunder was God's Voice.” (Baba was an Indian spiritual leader who declared he was an incarnation of God.) Pearl Jam recorded a cover of the song for this film.

If indeed the film reflects the song’s suggestion of love as redemption (albeit rather existential), then this film has the potential to echo with God-talk (even if it isn’t direct or overt). The film is due to release March 23.
(Image: Sony via Wikipedia)